The off-season is a time in hockey when teams can make large improvements in order to win more games in the following year. One way to do this, and probably the most notable, is through the player movement that occurs during the off-season. However, a second way is to analyze and improve the tactics a team will deploy for the next season. I focused on one area of the game that I think has room for improvement: special teams’ strategies.

There is a hypothesis in the NHL that during a short-handed situation, the team with fewer players on the ice should primarily focus on defense, preventing the other team from scoring a goal. In case you are unfamiliar with the rules, a power play occurs in hockey when one team receives a penalty for violating the rules of the game. When this happens, the team that is penalized has one less player on the ice, so they are considered “shorthanded.” With fewer players on the ice, a common strategy is to ice the puck immediately at every possession, rather than attempt to score a goal (“icing” is to send the puck from one’s own defensive zone to the other end of the ice). Normally, icing the puck results in a penalty and the offending team cannot change players while having a faceoff in their own defensive end. However, killing a penalty when a team has fewer players on the ice allows them to ice the puck.

When talking with the Harvard Hockey coaching staff and former assistant coach Rob Rassey, we had the idea that it might be beneficial to focus on offense, rather than defense, in a shorthanded situation because of the emotional boost that scoring a shorthanded goal would give a team in the middle of a game. Additionally, this might also create a negative sentiment within the team enjoying the power play. While scoring a goal at any strength is technically worth an equal amount on the scoreboard, we might be able to say that shorthanded goals are more “valuable” than power-play or even-strength goals if this emotional effect indeed impacts a team’s chances of winning. Therefore, I set out to determine if there was a significant improvement in a team’s probability of winning if they had scored a short-handed goal, relative to that from a power play or even-strength goal. If we find a significant result, then not only would this signal that teams should be more aggressive on shorthanded (or penalty-kill) situations, but also that teams on a power-play might want to be less aggressive.

In order to answer the question of whether shorthanded goals lead to wins more often than even strength or power play goals do, I retrieved data from hockey-reference.com and hockeyeloratings.com. This gave me a full dataset of each goal scored from the 2005-2006 through the 2017-2018 seasons with the following variables: the score of the game at the time each goal was scored, the final score of the game, and the Elo ratings of each team playing. Elo ratings are simply used to account for the strength of the two teams playing. I also added a column for the current goal differential in the game by subtracting the current away score from the current home score. If a game went to a shootout there were not extra observations in the dataset, but the final score is indicative of which team won. For example: if the Stars beat the Bruins in a shootout 2-1, this dataset would only include two observations for each goal that was scored in regulation.

I decided to use Logistic Regression for this analysis since my response variable had a binary response. The first thing I did to check if there was any validity to this theory was run a simple regression using only the strength of the goal scored (power-play, shorthanded, or even-strength) to predict the winner of the game. This model had shorthanded goals as the reference level, and the coefficients for even strength and power play goals were significant and negative. Thus, I knew that more investigation was needed, but at least there was some evidence to demonstrate that there might be a significant difference in a team’s winning percentage based upon the strength of the goal being scored.

Next, I created both a win probability model and a model that calculated the probability that a team would win a game given that they had just scored a goal. The response variable for my first model was whether or not the scoring team won the game. The predictors for this logistic regression included a factor for the strength of the goal with even-strength being the reference level, the current score of each team, the time and period of the goal, and the Elo ratings of the two teams. Additionally, an interaction term between the Elo ratings of the two teams was included. For the second logistic model predicting the home team’s winning probability, the predictors included the current difference in score, the time of the goal, the home and away team’s Elo ratings, an interaction between the time of the goal and the current goal differential, and an interaction between the two team’s Elo ratings.

For the model that predicted the home team’s win probability, results matched our expectations. For example, the probability of a home team winning a game when they were tied halfway through a game with both teams having an average Elo rating, resulted in a win probability of 50%. For the model that predicted whether the team that scored would win the game, the model predicted a team that tied a game between two average opponents at 1-1 halfway through the game won 69% of the time if the goal was a shorthanded one. If the goal were even-strength, the model predicted that the same type of team would only win 67% of the time, and only 64% of the time if the goal were scored on a power play. 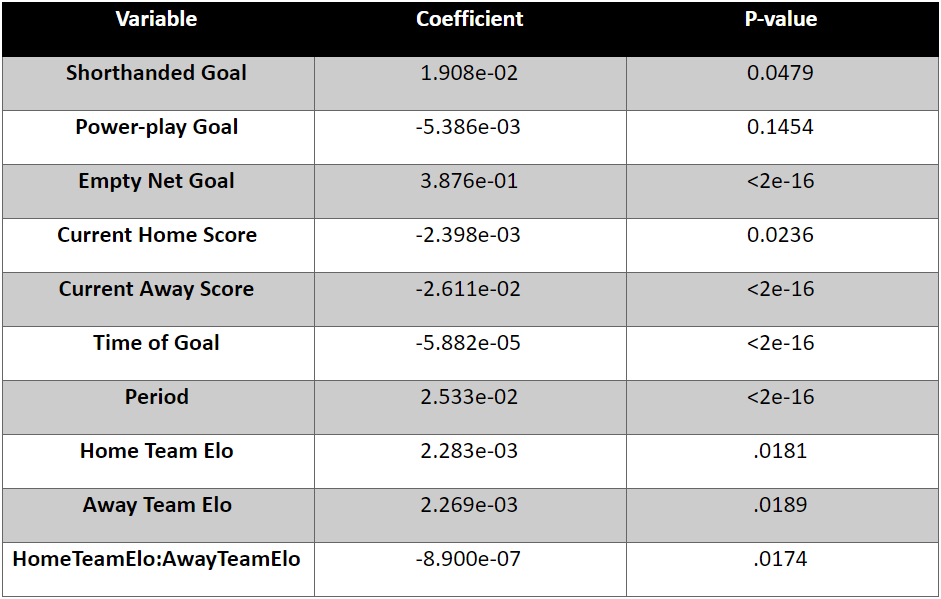 The most important takeaway from the above model is that there is a positive and significant linear relationship between shorthanded goals and an increased winning percentage when we hold these other variables constant. This demonstrates that scoring a shorthanded goal leads to a higher chance of winning the game as opposed to an even strength goal. Since the coefficient for the goal being scored on a power-play is negative, we conclude that it is also statistically significant that short-handed goals lead to a higher win probability than power-play goals do when holding other factors constant. The plot below illustrates this relationship: 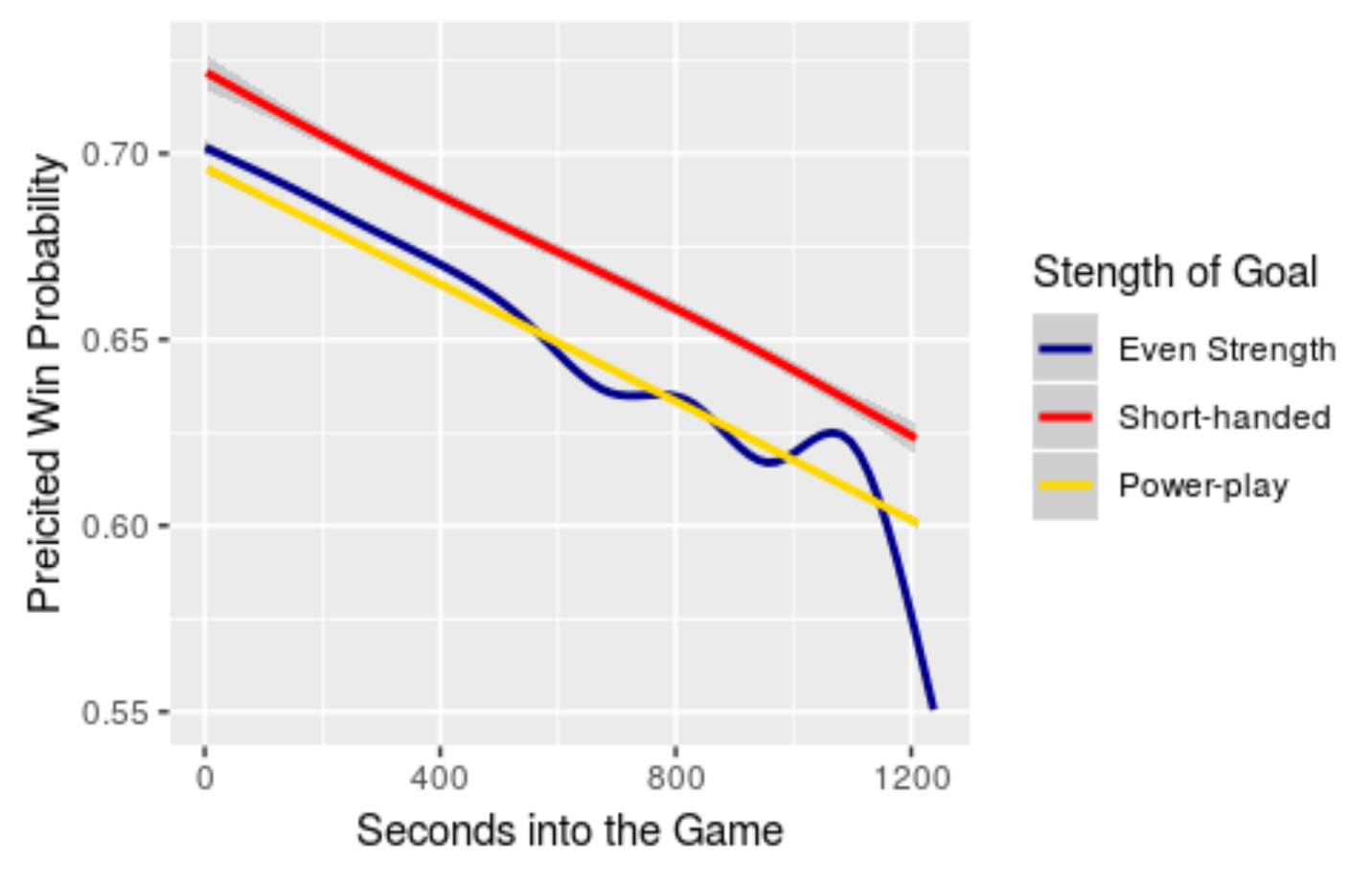 Looking at this plot, we are able to observe that the red line, which is the win probability when a team scores a short-handed goal, is consistently above the other two lines for other types of goals. This might be caused by the emotional benefit of scoring a shorthanded goal and the deflating emotional consequence of giving up a shorthanded goal. This model was fit using a smoother.

There are still some confounding variables that could have skewed the results. One of these is the fact that when a team scores a shorthanded goal, they are inherently still killing a penalty. In theory, the fact that they are still one player short should decrease their winning percentage given that the other team has a higher chance of scoring while they have a power play. This situation can be juxtaposed to scoring an even strength or power play goal when the game would then be at even strength or in some circumstances, the team that scored would still be on the power play. Another factor that could be affecting the model is that the model cannot take into account how aggressive a penalty kill or power play will be. Finally, there could be a confounding variable that teams that are giving up shorthanded goals against might be having a bad night as this is something that should not happen. This could be indicative of a team that is not focused on a given night, turning the puck over more often or giving the other team too much time and space. Additionally, of course, teams that give up more shorthanded goals might be weaker defensively than their Elo rating would suggest. Though, I’m skeptical; a team’s defensive strength is naturally baked into its Elo rating, and some of the best teams in the league gave up the most shorthanded goals. More investigation may be necessary, but assuming that these confounding variables even out, then the results of the model may still be valid. In order to account for these variables, we would need a more comprehensive dataset.

The question that must be answered next using more granular data, would be whether the benefit of scoring more goals, given that those goals are less likely to lead to wins if they are on a power play, still outweighs the risk of giving up a goal. To answer this question, a dataset that has the formation of each power play unit and the times that they were on the ice should be collected. With player tracking data available in the NHL next year, an answer to this question will be possible.

What Are The Chances Of One City Winning At Least Three Out of Four Titles In The Same Year?
The Greatest Dynasties of All Time