In late October, we watched Carlos Correa of the Houston Astros and Yasiel Puig of the Los Angeles Dodgers battle it out in a memorable World Series. Both players showcased their complete set of skills: they hit mammoth home runs, flew around the bases, put the ball in play, and showed off their glove and arm with impressive defense.

These are the types of players that can do it all – a baseball scout’s dream. They have four, or even all five, of the baseball “tools”: hitting for contact, hitting for power, base running, fielding, and throwing. These kinds of players are the stars; the ones always being discussed. But this post isn’t about them. Instead, we’re looking for those who excel at one skill while being awful at the rest: the one-tool players.

In order to quantify the five tools, we had find a statistic which would accurately measure them. The stat had to measure the tool itself, not necessarily outcomes. For example, a strong ability to hit for contact doesn’t necessarily imply a higher batting average, just as having the ability to hit for power doesn’t absolutely correlate into more home runs. The following section breaks down each tool and the statistic employed.

The tool of contact hitting is challenging to measure, as everyone will give you a different definition of it. Some will say that the best contact hitters are those with the highest batting average. Others quantify it by the percent of balls that are hit hard. We chose to literally measure contact: the percent of a batter’s swings in which he hits the ball. Below are the ten best from the 2017 season.

Atop the list is Zack Granite, a rookie outfielder for the Twins who sustained a ridiculous 95% contact percentage for his 107 plate appearances. However, that unbelievable figure only netted him a .237 Avg. With that said, some legitimate stars land on this leaderboard as well. Rockies second baseman DJ LeMahieu hit .310 and scored 95 runs, and veteran Red Sox second baseman Dustin Pedroia batted .288 while playing stellar defense despite an injury-shortened season.

ISO proved to be the best measure of a batter’s ability to hit for power. We considered using average batted-ball velocity, but plenty of balls are hit extremely hard, but end up as outs or singles given their near-zero launch angle. “Power” hitters hit the ball far – lots of doubles and home runs. Therefore, ISO is the perfect stat, measuring the extra bases per at bat. Here are the best power hitters of 2017:

Unlike the contact leaders, this leaderboard is riddled with superstars. National League MVP Giancarlo Stanton and perennial AL candidate Mike Trout are present, as well as both recipients of the Rookie of the Year in outfielders Aaron Judge and Cody Bellinger. We also see the effect of sample size. Both Matt Olson, of the Athletics, and Rhys Hoskins, on the Phillies, both made their marks on the season with historically powerful streaks. Olson hit 20 home runs in 36 games from August 11 to September 22, while Hoskins managed to one up him, hitting all 18 of his homers in one 30 game stretch. He began that month on an absolute tear: 11 home runs in his first 64 at bats. This is pretty rare: about once every 174 years, by the 2016 MLB standards.

Base Running:
“Base Running (BsR) is [an] all-encompassing base running statistic that turns stolen bases, caught stealings, and other base running plays (taking extra bases, being thrown out on the bases, etc) into runs above and below average.” –Fangraphs.com

The skill of base running is not simply stealing bases. Rather, we sought to include every aspect of the skill, whether that be stealing second, going first to third, or avoiding being picked off. BsR accounts for all of this. Additionally, because it is a counting stat, we divided it by games. Using games rather than PA or AB allows for an exclusively pinch-runner type player to be included. An argument could be made that when a scout surveys a prospect, they’re really just looking for raw speed. However, while BsR does not inherently account for this, there seems to be a strong relationship. As seen in the leaderboard below, five of the six fastest players are among the top 8 base runners. Additionally, with the exceptions of Betts, Bogaerts, and Semien, the players are within the top 26 fastest players.

Despite his young age, outfielder Byron Buxton is by far the best base runner in baseball. He maintained a better BsR than the his runner-up, Trea Turner, despite playing 42 more games. When compared to Billy Hamilton, the next best to play a full season, we see that Buxton ran to 22% better BsR. We also find that base running has some correlation with star potential, albeit not as much as power-hitting. Buxton and Turner, who are some of the most exciting young players in the game, make the list, as well as Mookie Betts, the 2016 AL MVP runner-up.

While fielding and throwing would be given separate ratings in a scout’s notebook, statistics are generally a measure of overall defensive value. DEF is the most comprehensive of these, incorporating a positional adjustor to allow for every player to be compared. It uses Ultimate Zone Rating to measure fielding runs for non-catchers, “and the stolen base component of Defensive Runs Saved and a separate blocking metric for catchers” (Fangraphs). Below are the ten best defensive players of 2017:

Gold Glove-winning shortstop Andrelton Simmons certainly deserved his award. He was far and away the best defensive player in baseball the past year, maintaining a DEF/G that was 16% better than the next best, third baseman Matt Chapman, despite playing in almost twice as many games as Chapman. The player closest to Simmons simply by playing time was Jose Iglesias, who played to a .1100 DEF/G in 130 games – Simmons was 30% better. The leaderboard is clearly affected by playing time, given that only four of the top 10 played 2/3 of the season (108 games). This is a result of our use of DEF/G instead of simply DEF, which we thought to be necessary in order to allow for players who were skilled fielders but would only be entering late in games as defensive replacements. The best defensive player with a season’s worth of games didn’t even make the list: Anthony Rendon came in at 11th with .1075 DEF/G in 147 games. Compared to Rendon, Simmons’ DEF/G was 33% better.

To reiterate, in looking for “one-tool” players, we sought those who excelled in one of our skill statistics, while being poor in the other three. In order to do this, we first normalized the data, then subtracted the three lesser stats from whichever was highest for that player. The results are below: 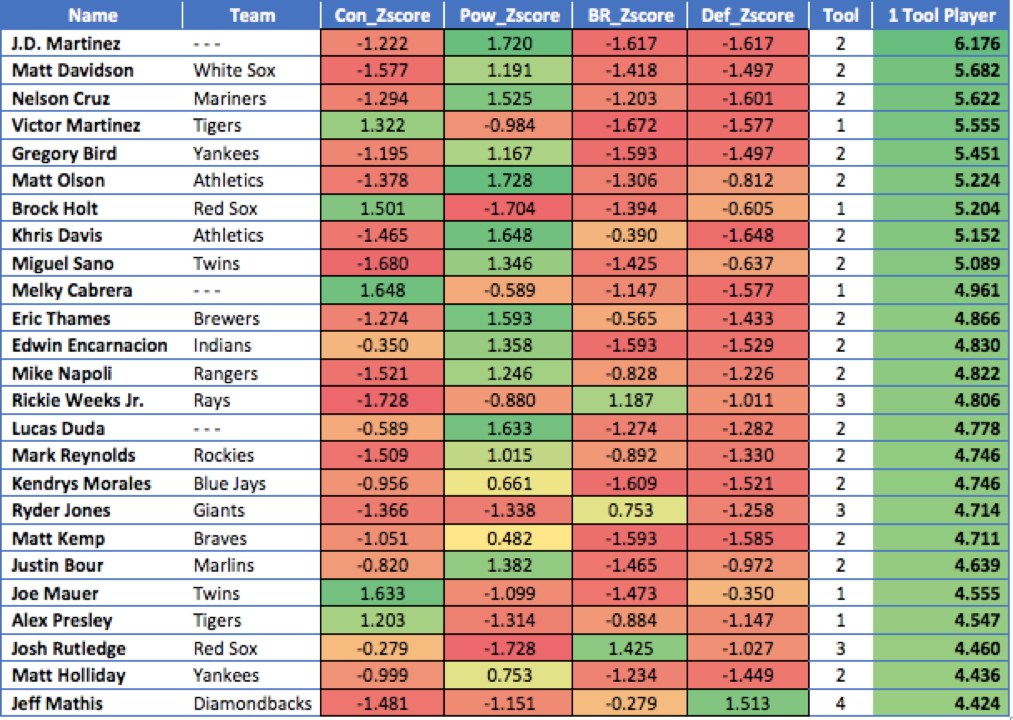 Apparently, J.D. Martinez, a current top-tier free agent who played right field for the Tigers and Diamondbacks last season, is the most one-tool player in the game. It’s not even that close. On a relatively tight leaderboard, he is clearly ahead of the second place, Matt Davidson. Martinez is one the best power hitters in baseball – his .387 ISO ranked second behind only Matt Olson – but he is a poor contact hitter, and even worse base runner and fielder. This came as somewhat of a surprise. After all, he hit .303 this year, and his worst AVG of the past four years was .282 in 2015. Somehow, he managed to accrue a very-respectable AVG despite a poor ability to make contact with the ball. How does he do it? He may not make contact as often as most others, but when he does, he hits the ball hard. According to Fangraphs, 49% of his batted balls – more than anyone else this season – qualified as “hard-hit” in an algorithm created by Baseball Info Solutions. Interestingly, this algorithm does take exit velocity (which has become increasingly popular in the Statcast era) into account, instead relying on a combination of “hang time, location, and general trajectory”. This equation certainly benefitted Martinez, as according to BaseballSavant, his average exit-velocity was only 19th.

Power hitters are far more likely to be one-tool players than those who specialize in another skill. As we see in the table, 16 of the 25 most one-tool players are power hitters. In contrast, we see only five contact hitters, three base runners, and a single fielding specialist: Jeff Mathis, at number 25. This is somewhat intuitive. The stereotypical power hitter – a large, hulking figure – would not be one’s first pick as a base runner or fielder, certainly. Furthermore, baseball’s hitting culture is shifting for strikeouts to be acceptable as long as they are accompanied by home runs. This all-or-nothing approach diminishes contact percentage. Finally, the number of one-tool players in base running and fielding is small because of their overlap. As mentioned in the discussion of the BsR statistic, while pure speed is not measured, it correlates. The same could be said of fielding, especially for outfielders. Simply being faster will allow a player to get to more balls, regardless of their skill. Therefore, fast players are likely to be given a boost in both BsR and DEF that limits their potential to be one-tool players.

What do Kendrys Morales and Matt Kemp have in common?

When glancing through the color-coded cells of the leaderboard, two in particular stand out; namely, the power z-scores of Morales and Kemp. Both are quite yellow in what is otherwise a sea of red and green. Their appearance reveals a potential flaw in the methodology. Their yellows coloration signifies those scores as largely mediocre, whereas we would expect them, as one-tool power hitters, to be green. Morales and Kemp get included in our algorithm because they are really, really, bad at the other three skills. Although their one positive score isn’t all that high, the magnitude of the negatives, when subtracted, is enough to raise them to where they can be considered one tool players.

Editor’s Note: If you have any questions about this article, please feel free to reach out to Ethan at emccollister@college.harvard.edu