As a league, the NBA is well-known for its innovation and adaptation to new trends. No trend currently embodies this idea as much as the focus on small-ball. Small-ball is a hard concept to define, but it is generally the idea that teams can sacrifice rebounding for shooting and playing quickly. This results in teams playing smaller players (who also happen to be better shooters) at power forward or center, decreasing the number of players around the rim and increasing the outside threat of the team. When discussing this phenomenon, most sports analysts comment on the height sacrifice that teams are making, substituting Draymond Green in at center or LeBron James at power forward. We see this transition also with taller skinnier players though, Kevin Durant, Chris Bosh and Kevin Love moving up a position despite the fact that they are conventionally too skinny. What effect is actually sweeping the NBA, a decrease in height, a decrease in weight, or a combination of both? 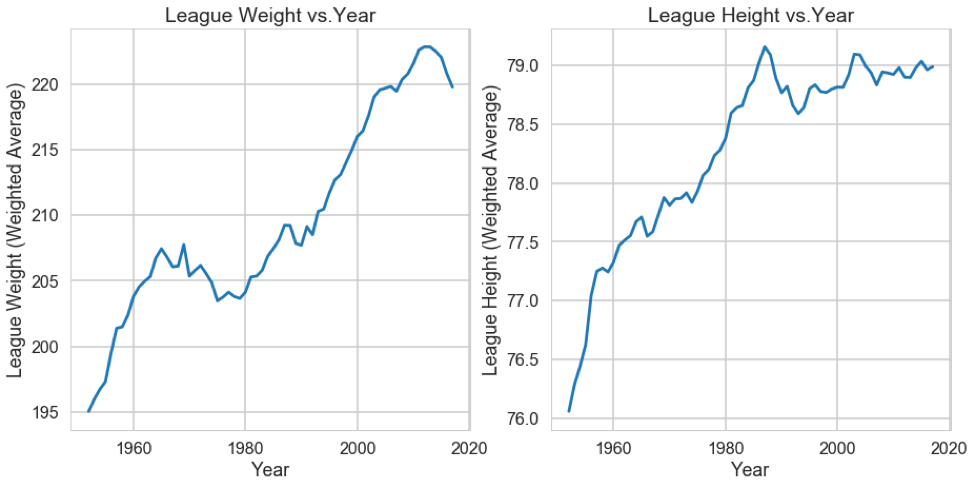 Restricting this to the 2000s, we can highlight the current effect here: 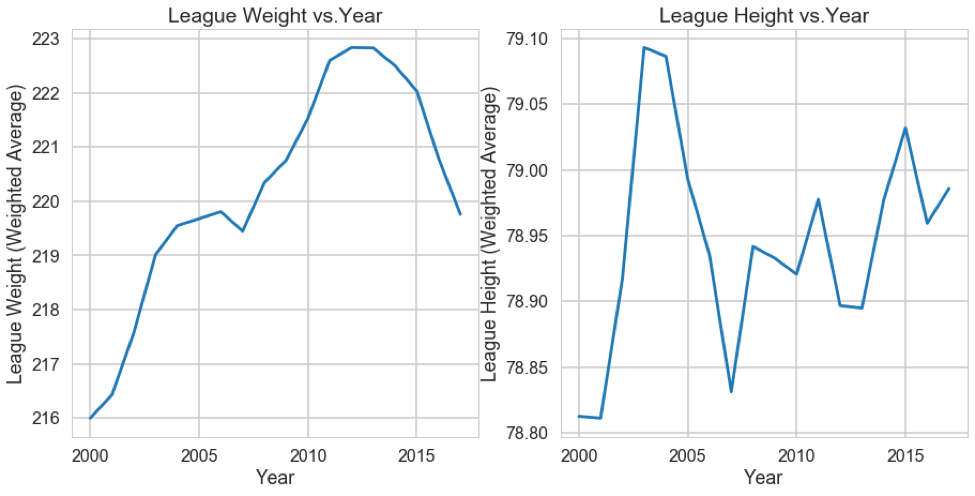 While both the height and weight of the league increased drastically from 1952 (the first year with minutes data) to 2000, the pattern in the 2000s is strikingly different. The weight of the league rose 7 pounds from 2000 to 2013, before dropping nearly 3 pounds steadily over the course of the next 4 years. Meanwhile, the weighted average height has stayed between 78.8 and 79.1 inches (about 6’7”), for the entirety of the 21 century.

From here we can start to wonder about what impact this has on teams. Are taller teams winning more games? Are heavier teams winning more games? Are smaller teams playing faster? It turns out that the answer to the first two questions is no. Since 2000, there is not a statistically significant relationship between winning percentage and either height or weight. Even after restricting the sample to the last 5 or 10 years, we cannot find any significance. However, there is some evidence to suggest that lighter teams play faster, at least recently. While weight has not been statistically significant when considering the entire 21st century, it has been highly significant in the past five years: 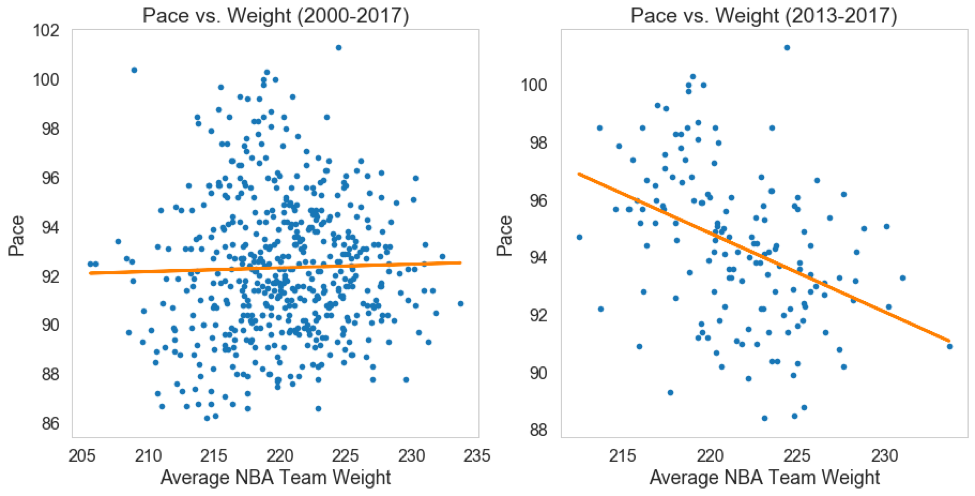 While this effect does not suggest much significance over the early years on the 20th century, it has now become highly significant, corresponding with the rise of the small-ball fad in the NBA. It should be noted that this similar effect does not exist for height.

This may seem like an incredibly obvious result, but it highlights another efficiency that NBA teams have gravitated toward in the past 5 years. Teams are slimming down, and using their athletic advantages to run the heavier teams of the floor. The NBA is again trending lighter, and it will be interesting to watch how this stabilizes over the next 5-10 years.

In The MJ vs Lebron Debate, The Strength Of The Eastern Conference Is A Serious Talking Point
What about Dame? The biggest NBA All-Star snubs of the past three years