In the 2013 NBA Finals, right before Ray Allen hit what will inevitably go down as one of the greatest shots of all time, hundreds of Heat fans were already filing out of the American Airlines Arena, cementing the widespread notion that Miami had the worst fans in the league. Four years later, as the Cavaliers, Warriors, and their questionably bandwagon supporters reach yet another NBA Finals, the age old question re-emerges, “Which team has the most loyal fans?” It’s about time that we start ranking—as we do with everything else in sports—NBA fans’ dedication to their teams.

To assess fanbase loyalty, I examine how stadium attendance responds to a team’s performance. In theory, a perfectly loyal fanbase’s attendance remains relatively constant from year to year regardless of the team’s performance. More colloquially, fans will stick with their team “through thick and thin.” Conversely, disloyal, “fair-weather” fans will show up to games only when their team is doing well and disappear when their team is underperforming. To quantify this relationship, for each NBA team I calculate the correlation between win percentage and attendance for as far back as the team has remained in its current stadium for every season dating back to the 1991-1992 season. 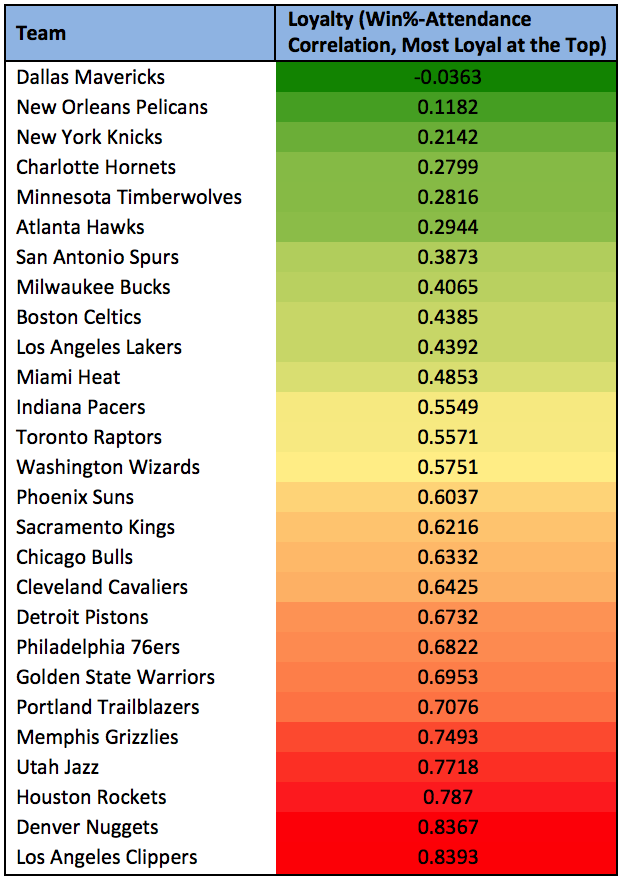 At the top of the chart are the most loyal, “diehard” fanbases (as signified by low correlations between wins and attendance) and at the bottom are the disloyal, “fair-weather” fans. Leading the pack in loyalty are the Dallas Mavericks (who actually posted a slightly negative correlation) and the New Orleans Pelicans. Among the least loyal are the Houston Rockets, Denver Nuggets, and Los Angeles Clippers. Interestingly, despite all the flack that Heat fans received for being fair-weather LeBron fans, they finished in the top third of the index. The results for the Cavaliers and the Warriors, which do not include their recent dominant years, suggest that their fanbases are moderately below average in loyalty. Because of their recent relocations and thus small sample sizes, I omit the Brooklyn Nets, Orlando Magic, and Oklahoma City Thunder from the rankings.

We can visualize the significance of these correlations by plotting a team’s wins and attendance over time. For example, such a chart for the Detroit Pistons demonstrates why their fanbase falls on the disloyal end of the spectrum: 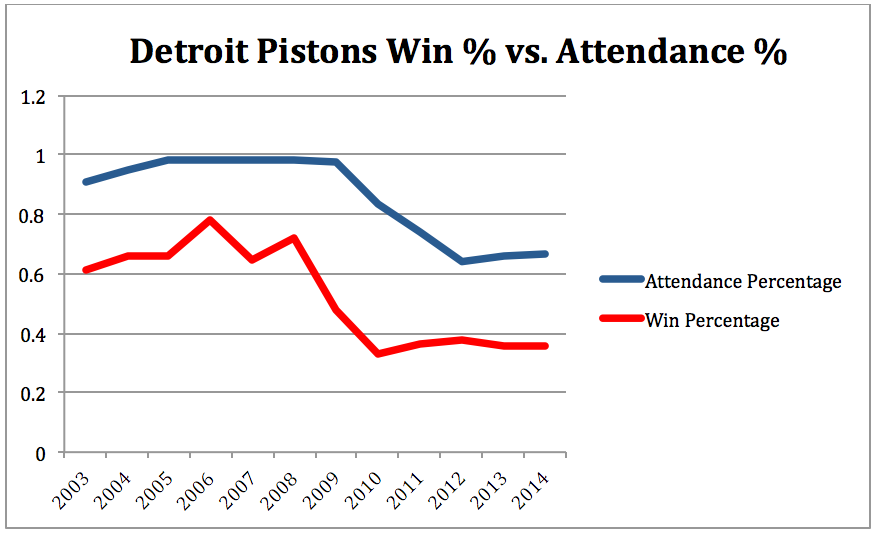 When the mid 2000s Pistons dominated the league, attendance at The Palace of Auburn Hills consistently hovered around 100%. However, when the Pistons fell out of playoff contention, fans fled their home games, leaving The Palace empty.

Similarly, when the Portland Trailblazers suffered a disastrous few years of play in the mid 2000s, their attendance concurrently dipped, but as the Blazers began to resurge in the following years, their attendance jumped right back up to full capacity:

Some other teams show less of a responsiveness of attendance to wins. For example, despite fluctuations from elite play to more modest performances, attendance percentage at the Dallas Mavericks’ American Airlines Center consistently hovered close to 100%:

There are of course a host of threats to the validity of this analysis. One potential source of error is that the heterogeneity in duration of current stadium stay may bias the reliability of the correlation results. We must also recognize that stadium attendance isn’t a perfect proxy for loyalty, as dedication to a team manifests itself in all sorts of ways. For example, fans show support by watching games on TV, buying merchandise, or just closely following news on their team.

Additionally, stadium attendance will be biased by variables other than wins, such as city size, mean city income, stadium location, presence of a superstar on the team etc. For example, teams in cities with above-median income had a correlation of .42 vs. .59 for lower income cities. Similarly, cities with above-median population had an average correlation of .41 vs. .55 for lower population cities. These disparities are expected since larger, wealthier cities have an easier time filling up seats regardless of their team’s performance. For example, the Knicks, who ranked third in the loyalty index, consistently maintained attendance percentage in the high 90s through strong and poor seasons likely because Madison Square Garden is situated in the center of one of the biggest, wealthiest cities in the country:

Another interesting hiccup in the results is the possibility of simultaneous causality, wherein higher attendance causes home teams to perform better, although that hypothesis may be giving fans a little too much credit.

While we cannot extrapolate perfectly from this loyalty index, hopefully it will feed fuel to the fire of the everlasting debate of who has the best fans.

Editors Note: This article is a condensed version of a research paper conducted for the Harvard Sophomore Economics Tutorial (Econ 970: Strategy and Competitive Advantage). If you would like to read the full length paper, please contact Nicholas at nheath@college.harvard.edu.