Before the knockout rounds of the European Championships begin, I wanted to give everyone a quick update on the Elo-based model. Below are the chances that each team will reach each knockout round and the change between now and the start of the tournament for each of these numbers. 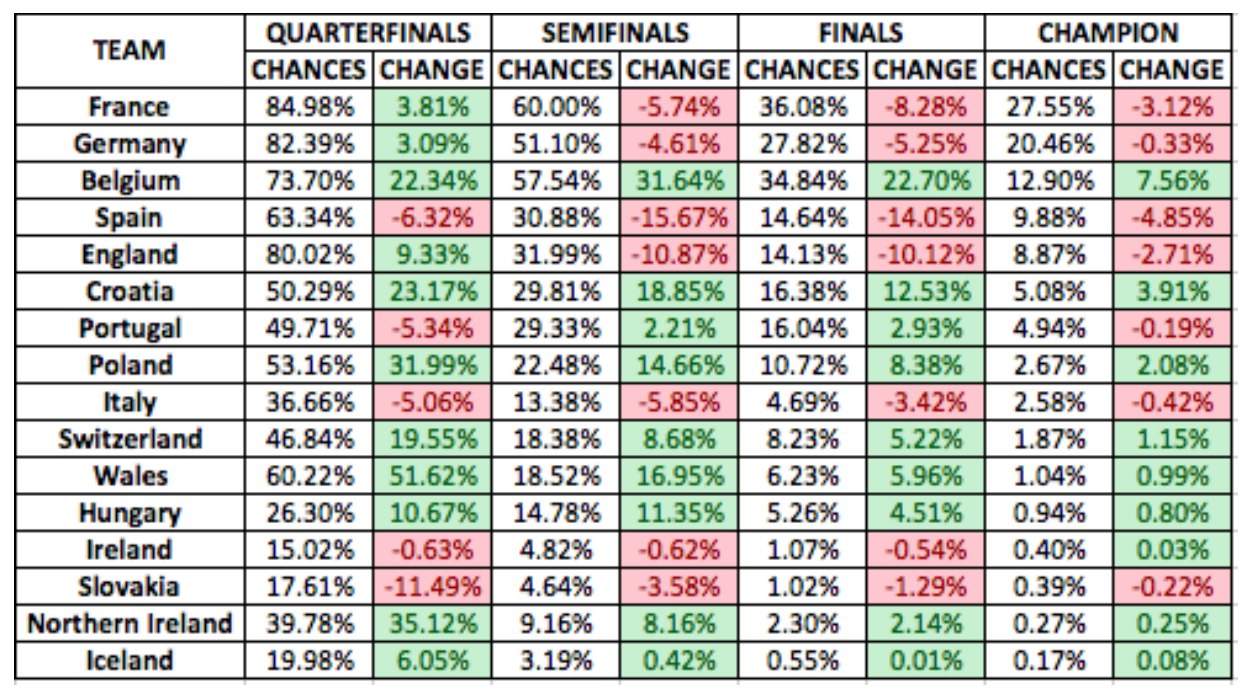 It is safe to say that the two halves of the bracket are not equal in terms of team strength. Five of the top six teams in the tournament, according to Elo ratings, are on one side of the bracket, with Belgium being the lucky team to avoid it. Because of this, Belgium are the big winners here, with their chances of advancing to the semifinals, finals, and winning the tournament more than doubling, despite finishing second in their group. On the other hand, the winners of their group, Italy, are rewarded with a tough match-up against Spain, which makes the 6th best team in Europe, based on Elo ratings, the 9th most likely to win the tournament according to the Elo model. France, Germany, Spain, and England also had their chances fall from their pre-tournament probabilities, despite their Elo ratings remaining relatively consistent. Along with Belgium, Croatia, Portugal, Poland, and Wales are the big winners on the other side of the bracket, as their chances of making the final took a pretty big jump. Croatia played very well in the group stage and has had their chances increase just as much because of the increase in their Elo rating. On the opposite end of the spectrum, Portugal’s chances increased despite of the change in their Elo ratings, which dropped 34 points in the group stage.

Despite many of the later round implications that have come to light due to the unbalanced bracket, there are still plenty of interesting storylines in the Round of 16. Many people are looking forward to seeing Spain and Italy, with Italy’s defense winning a lot of plaudits for how well they have played this tournament. The Elo model favors Wales over Northern Ireland who will both be looking for their first knockout win in a major tournament. Wales’s Elo rating remains pretty low so their chances of advancing further in the tournament are low according to this model, but I feel their chances are underrated, as it is hard to account for a world-class player like Gareth Bale. The Croatia-Portugal matchup is the most even Round of 16 match and the winner will likely be second favorite to reach the final for that half of the bracket. Lastly, England will be looking to get their second ever knockout stage victory at a European championships. While they have only advanced once in a European knockout round, they have never outright lost, with every knockout round game that England has played at the Euros since 1968 going to penalties. Unfortunately for England, they have only won one of those four penalty shootouts. The Elo model has them as heavy favorites against Iceland though so there is hope for England supporters that they can break this trend.

Are European Draft Picks Worse Value Than Americans?
Are Promoted Teams Having a Tougher Time Staying in the Premier League?