The monster three-team trade (Philadelphia snagging picks and tanking…again) centered around Kevin Love and Andrew Wiggins has sparked much of the NBA chatter this past summer. Central to the debate is how many seasons Cleveland has in which it can realistically win a title with LeBron as its primary star. If the window is only two or three years, trading for Love and maximizing that championship probability is rational. If one thinks the window will be open for longer, perhaps keeping Wiggins and watching him blossom into this generation’s Scottie Pippen is the optimal strategy to be relevant for the next decade.

To get a sense for how long we can expect LeBron to be able to be “the best player on a championship team”, I found the distribution for such players dating back to the NBA-ABA merger. My determinant of “best player” was whichever player had the most regular season win shares for a team that went on to win the championship.

I chose this methodology to keep it consistent but there were a few anomalies. Would you really call Kawhi Leonard the best player on the Spurs this past season, or refer to the 2008-2010 Lakers as Pau Gasol’s team over Kobe (not to mention the Bad Boy Pistons’ best player being Bill Laimbeer rather than Isiah Thomas)? By and large though it was the players you most associated with leading that team. 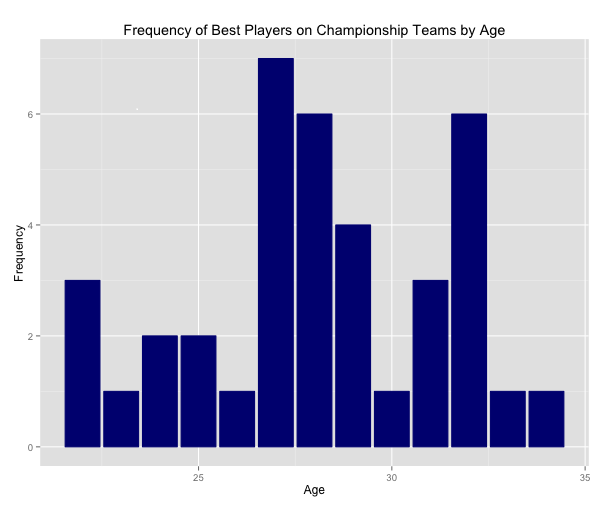 The mean age is 28.1 with a standard deviation of 3.2. The distribution as a whole skews younger than I expected. Notably, only one player has been the best player on a championship team after the age of 32: Michael Jordan (who did it twice and is solely responsible for the right tail). If we expand to also include best players who made it to the Finals but lost, the picture is still very similar. 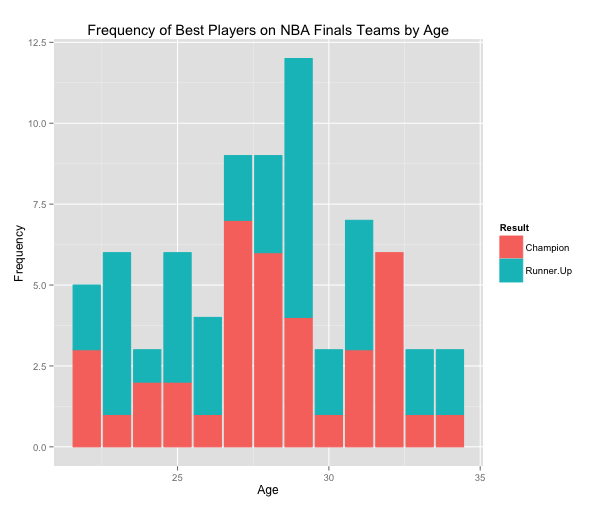 Karl Malone and Jordan when they were both in their age 33 and age 34 seasons and playing each other, Elvin Hayes of the 79 Bullets and a throwback Reggie Miller in 2000 are the only other players over 32 to be the best player on a Finals team.

As LeBron enters his age-30 season, perhaps his days as the dominant player on a championship team are somewhat numbered. It’s possible he emulates Jordan and can lead his team to glory beyond 32, but James has been in the league since he was 18, unlike Jordan who played three years of less demanding college. Of course, Kevin Love and Kyrie Irving could ultimately take over from the King and may be good enough to lead the Cavs to rings, but for James, history would imply that window is shorter than you might think.