Here’s a look inside the final sequence of Sunday’s wild 20-18 loss to the Cardinals. For my numbers, I’m making use of the Win Probability Calculator made available by advancednflstats.com. Specifically, I’ll be investigating the Patriots’ decision to settle for a 42-yard field goal at the end of regulation rather than attempting to improve their field position. 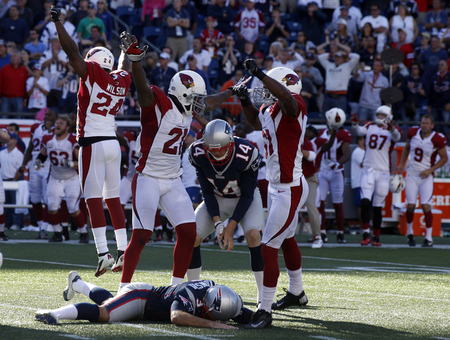 At this point, things are looking awfully fortunate for the Patriots. They just recovered a miracle fumble, and though a couple of Gronk malfunctions (a holding penalty that nullified a touchdown and a false start) may have cost them a sure victory, they still hold a 76 percent chance of winning the game. Their expected points value here is +3.56, meaning that teams score touchdowns more often than field goals in this scenario. However, the Pats elect to take the conservative route, with Tom Brady centering the ball in the middle of the field, sustaining a one-yard loss on the play. The clock winds down to seven seconds before Brady spikes the ball to stop it.

The game will be decided by a Stephen Gostkowski field goal attempt. According to a separate bit of research from Advanced NFL Stats, kickers convert from this distance just under 80 percent of the time. The Win Probability Calculator concurs with this figure, giving the Patriots a 78 percent chance of victory—still comfortably in their favor and slightly higher than before, but not significantly so. Gostkowski misses the ensuing field goal try, and the Patriots lose a shocker.

Now let’s imagine a scenario in which the Pats continue their drive toward the end zone. Forty-six seconds is enough time within which to run two plays, and taking the Patriots’ average yards per play for the game (5.0), let’s assume they gained an additional ten yards before spiking the ball with seven seconds left.

This is chip shot distance. From this range, kickers successfully make field goals about 90 percent of the time, again coinciding with the Win Probability Calculator’s figures, which give the Patriots an 86 percent chance of winning—a better outcome than the scenario in which they ultimately placed themselves.

The main takeaway here is not that the Patriots sacrificed exactly 0.08 points of Win Probability by playing it safe, but rather that a 42-yard field goal is far from a sure thing. Why settle for it when you have an incredibly competent quarterback—one with a miniscule 2.1 percent career interception rate, I might add—who’s more than capable of pushing the result closer to “sure thing”? A slide into the middle of the field is hardly the optimal use of Brady’s talents.

This post can also be seen on Boston.com here.

How Many Years Does Tom Brady Have Left?
This Is The Angriest America Has Been At Referees Since The 2006 Super Bowl