Where do France rank among previous World Cup champions? While France looked dominant at times during the World Cup, I wanted to find out how they compared to the champions of the past. Were France simply lucky, an average side bolstered by an easy draw? Or were there hurdles Les Bleus had to overcome that other champions did not face? In other words, was there anything specific about their run that was harder or easier than the best sides of the past?

To answer these questions, I compiled the Elo ratings of the top four squads at each World Cup, along with those of their opponents. I then made calculations based off of the dataset. These calculations were done using pre-tournament Elo ratings from World Football Elo Ratings, although I also used post-tournament Elo ratings at two points to account for any gaping errors in rating quality. While Elo is not a perfect ranking system, it is retroactively available for all teams in the World Cup going back to 1930. Something important to keep in mind is that Elo is relative. While an Elo rating over 2000 almost always signifies a world-class team, its reliance on current results makes it hard to judge a team’s quality versus another decades apart. However, Elo allows me to judge France’s relative path to victory versus other top-performing sides (fourth place or better).

While Elo was initially developed for chess, it has strong transferability to soccer. Professor Jan Lasek of the University of Warsaw found that Elo outperforms the official FIFA rankings in predictive power. FIFA apparently noticed this discrepancy and sanctioned a move toward an Elo-based ranking system earlier this year.

To begin, France’s pre-tournament Elo of 1987 was average among World Cup champions, ranking 10th of 21. They are the first champion since Italy in 2006 to have an Elo under 2000. While their ranking before the tournament appears lacking compared to the two previous champions, France appeared to have the makings of a typical victor. 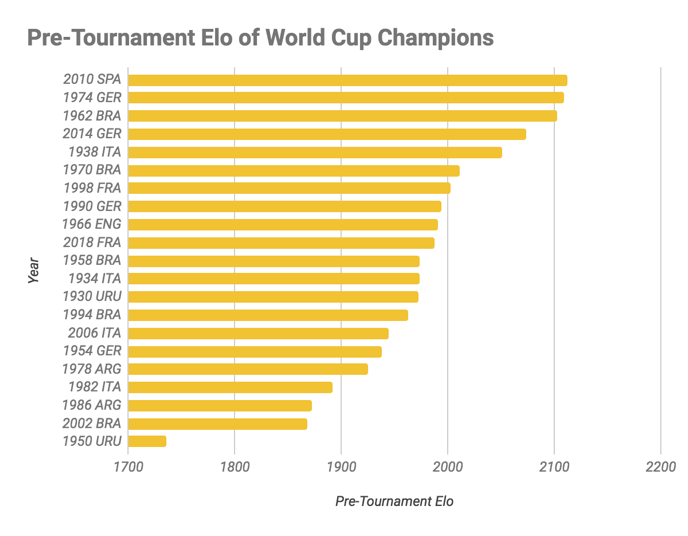 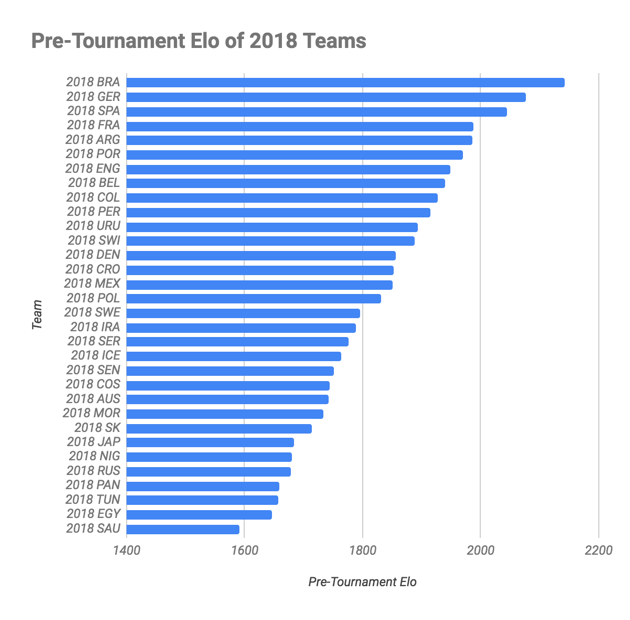 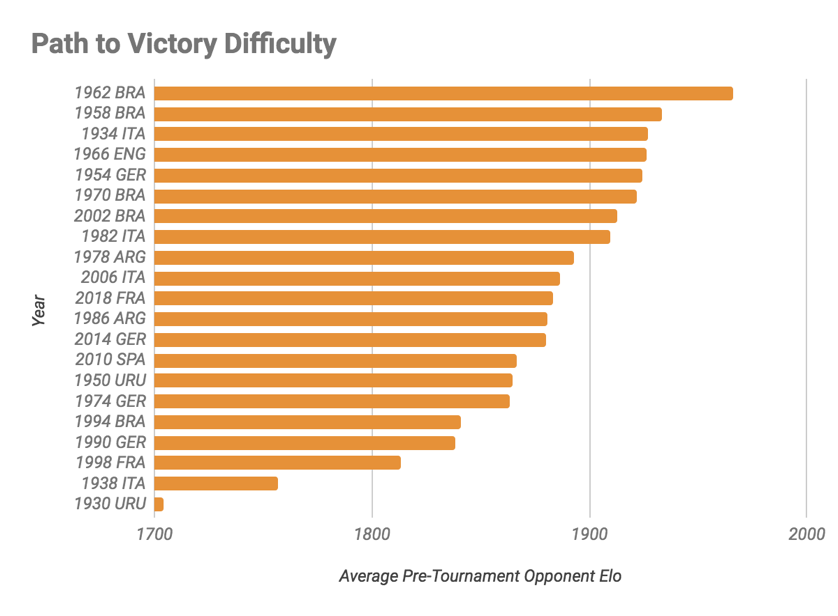 However, France’s path to victory is an outlier in terms of absolute quality and flow. The French squad dodged a truly elite team en route to its championship. France are only one of eight champions to have avoided playing a team with an Elo over 2000. Germany’s 2014 side, while having an average opponent Elo lower than France’s, played the highest-ranked team of any World Cup champion (Brazil, with a rating of 2138). Additionally, France had their toughest matchup unusually early. France played their highest ranked opponent–Argentina, with a rating of 1985–in the round of 16. They are one of only four champions to have played their toughest opponents before the quarterfinals (the others being West Germany in 1974, Argentina in 1978, and West Germany again in 1990). Their peak opponent Elo is fifth-worst among champions. To account for pre-tournament Elo’s possible underrating of good sides, I redid my calculation using post-tournament Elo, which should boost dark horses. By this metric, however, France rank dead last, making their victory over Argentina seem even more hollow. 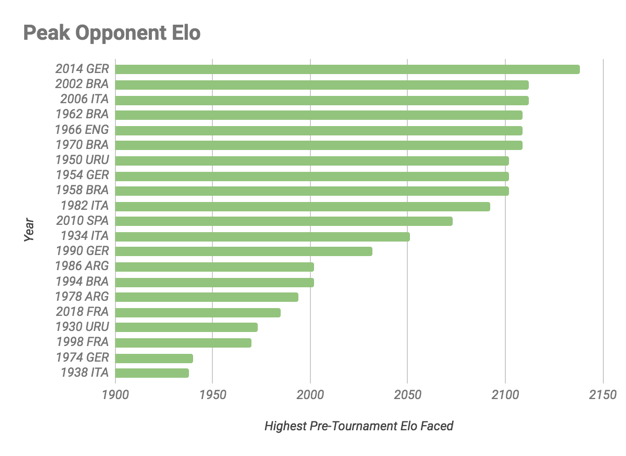 Indeed, France appear especially lucky with how the draw shaped up when comparing runners-up. While lovable, Croatia were the fifth-worst finalists in World Cup history with a pre-tournament Elo of 1853, the weakest finalist since Argentina in 1990. That may not be entirely fair to Croatia. After all, they should not be punished for having been a Cinderella story. But, when using post-tournament Elo, which should bolster Croatia’s credentials, they actually fall to fourth-worst of all time. 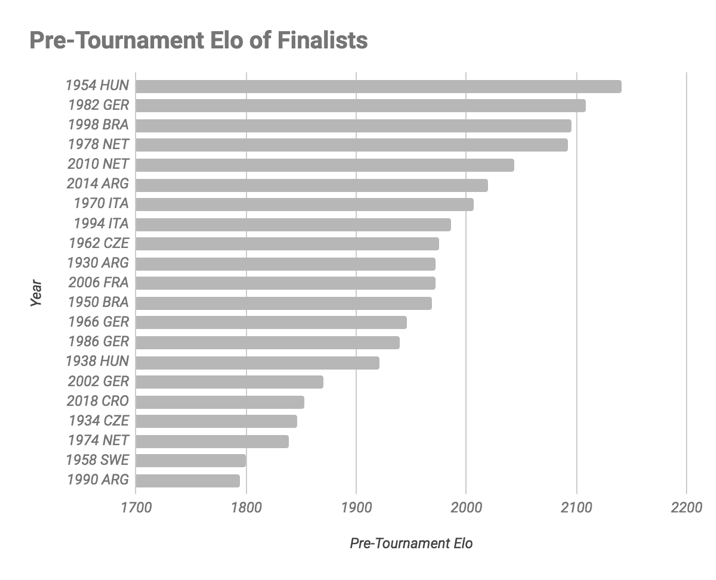 Should these factors have made France’s victory feel more preordained than previous champions? To answer this, I calculated win probabilities from the round of 16 onward using Elo ratings. I started with West Germany’s 1986 victory–the first modern World Cup to have a 16-team knockout stage–and moved forward. While the 1934 and 1938 World Cups had rounds of 16, there were no group stages, which diluted team quality. To best compare France to champions in the same position, I ignored those Italian sides.

Using Elo win probabilities, France had a 12.4% chance of winning the tournament from the round of 16. This may seem small, but the average among modern champions is 11.6%, making France’s victory only slightly more predictable than normal. The highest probability belonged to Spain in 2010, when pre-tournament Elo pegged their chances of victory at 26.2%. On the other end of the spectrum were Brazil in 2002, where they had a 1.8% chance of victory. An important qualifier to this finding is that the metric is purely retrospective, since it uses the pre-tournament Elo of the opponent in each round. Calculating France’s probability of winning the tournament a few weeks ago, when their opponents were unknown, would have yielded a different number. 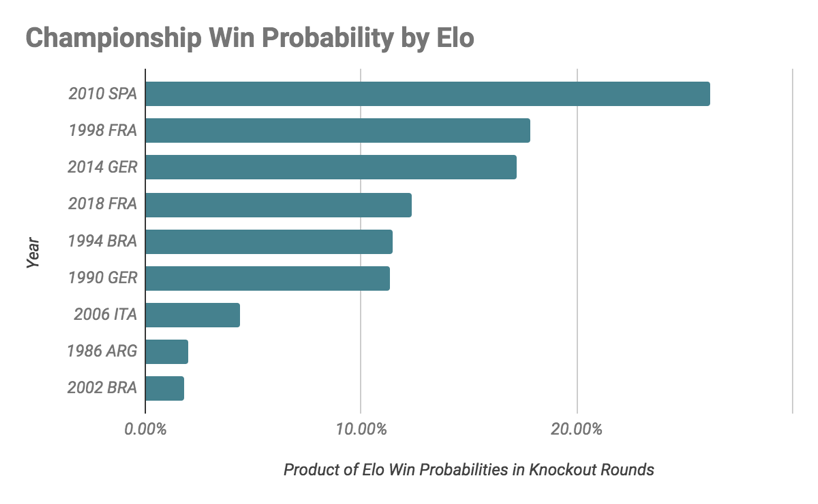 There are two interesting things to note here. First, as a whole, pre-tournament Elo had a positive relationship with the product of Elo win probabilities in the knockout rounds. This makes sense intuitively. We expect stronger teams going into the tournament to have a better chance of winning knockout matches. 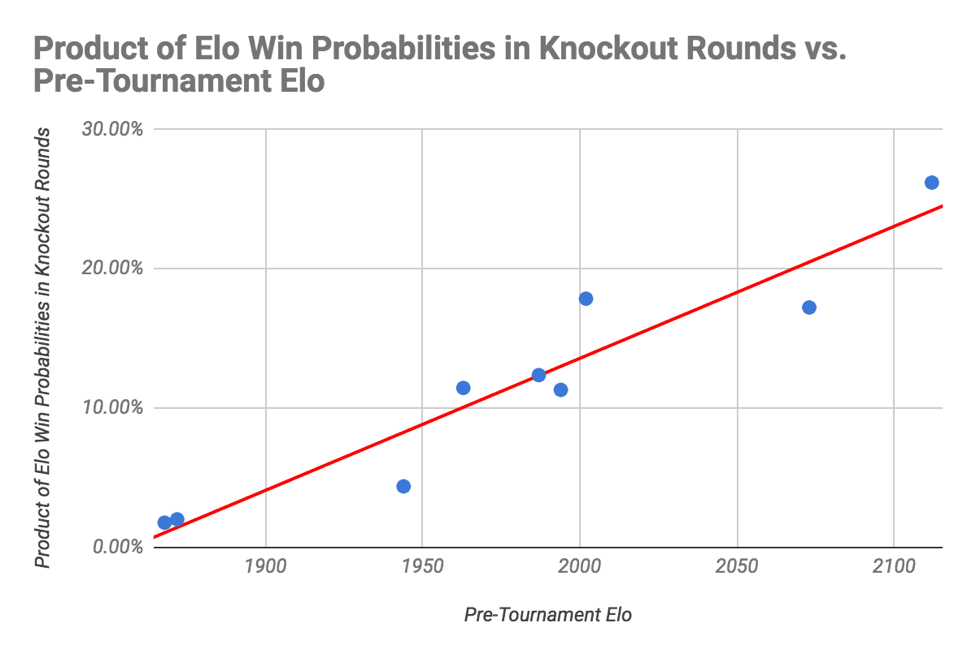 Second, the average Elo win probability by round trended downward as the tournament progressed. This should be expected. However, on average, our 9 champions were underdogs in the semifinal, while the final was a coin flip according to Elo win probability. This informs us that, given a surplus of quality teams in later rounds, pre-tournament Elo’s predictive power (even when used match-by-match) decreases as the tournament progresses. This is a topic to explore further using more than just the 9 most recent champions. 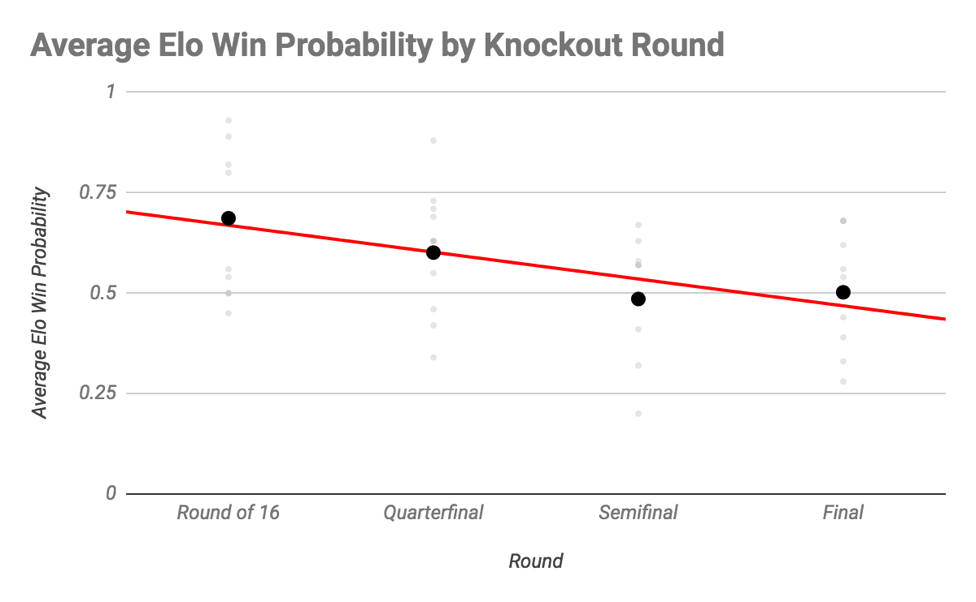 Does this mean France did not deserve their victory? Not necessarily. Compared to all top-four finishers in World Cup history, France’s average opponent Elo ranked in the 70th percentile. Due to factors out of their control, presumed giants like Germany, Spain, and Brazil flamed out before having the chance to play France. Even when France did face a pre-tournament favorite in Argentina, La Albiceleste’s lack of quality was made clear. Still, nobody can fault France for this. Les Bleus won every game they played, avoided the temptation to lose their way into an easier draw (hello, England), and showed grit and determination throughout the tournament. That said, much like early criticism of coach Didier Deschamps’ conservative handling of the French squad, the 2018 champions may suffer in the future for not having that statement victory against a global power we have come to expect of World Cup champions. Much like their path to victory, France may be retroactively viewed as, well, average.

How Predictable Was The 2018 World Cup?
Is There Any Evidence To Support The Presence Of A World Cup Hangover In The English Premier League?