As pitchers and catchers report today in preparation for the 2018 Major League Baseball season, we look forward to the future of baseball – the prospects.

Many publications have predicted a widening disparity in quality in the league, with franchises looking to tank in hopes of a brighter future. This paper looks at how confident we can be in the outcomes of prospects who have yet to make the major leagues.

Every MLB team has a series of minor league affiliates where young players develop. These players are either drafted out of high school and college or signed from baseball crazed foreign countries such as the Dominican Republic and Venezuela. After being signed, they are placed in the minor leagues, where they ply their trade in small towns across the United States in preparation for their ultimate call up to MLB.

As they represent the future of the game, every team invests resources into evaluating them as prospects. Scouts are employed that write reports describing a player’s ability on the field. These scouting reports become reputations, and there is a lot of excitement as these players rise through the system. Organizations are able to trade these players, so it is important to understand how they will perform in the future.

This infatuation with ranking players has extended to the public sphere. Fans are hoping that their team has the next Mike Trout or Clayton Kershaw in their minor league system – especially those that are currently win starved. With this demand, organizations like Baseball America and ESPN produce lists of the top 100 prospects in the minor leagues every year. In this post, we will dive into the Baseball America’s preseason top 100 rankings to determine how good they are at evaluating talent in the years 2013, and 2015-17 (other years are not available). We took the most recent grade from players that appeared multiple times on the list, only focusing on position players as it easier to interpret their ratings.

Position players in baseball are evaluated on five tools: hitting for average, hitting for power, running, throwing and fielding. In the 20th century, teams wanted to standardize the way that players were evaluated and settled on a scale from 20-80. On this scale, 50 represents a major league average tool. While the people who created this model likely did not think about its statistical interpretation, the scale distributed fairly normally. Every 10-point increase on the scale represents one standard deviation above average, so we find 80 and 20 grades to be extremely rare occurrences.
Our 5 predictor variables:
· Hit – This tool describes how well a player can hit for average.
· Power – How far a player can hit a ball. This tool is sometimes broken into raw power and game power, but we are only using one measure, which encapsulates both.
· Speed – How good of a base runner a player is.
· Fielding – How good a player is at fielding their position. This only describes defense from bat to glove. It measures a player’s range as well as their defensive IQ and ability to make the routine plays.
· Arm – A measure of a player’s throwing ability. This includes both players’ arm strength and accuracy, with more emphasis on arm strength as accuracy can usually be taught.

With data from Baseball-Reference and Fangraphs, we looked at how the grades predicted the following variables:
· WAR_162: A player’s wins above replacement per 162 games. We chose this measure because it levels the playing field for those with less experience.
· BA: Player’s Batting Average
· SLG: Player’s Slugging Percentage
· SPD: Baserunning rating assigned by Fangraphs
· dWAR_162: Player’s defensive wins above replacement per 162 games.

Our main variable of interest will be WAR_162, as it is a stat that tries to encapsulate all of what a player does on the field. In theory, all of our variables should be valuable predictors. However, it has been shown that some tools are more important than others. For the other response variables, we will run backwards stepwise regressions to find the most predictive tools.

WarPer162 Games
We decided to not zero out players whose WAR was below zero for our tests because we think that their performance should be noted. Our methodology also makes it easier to identify “busts”- players who fail to live up to their billings. 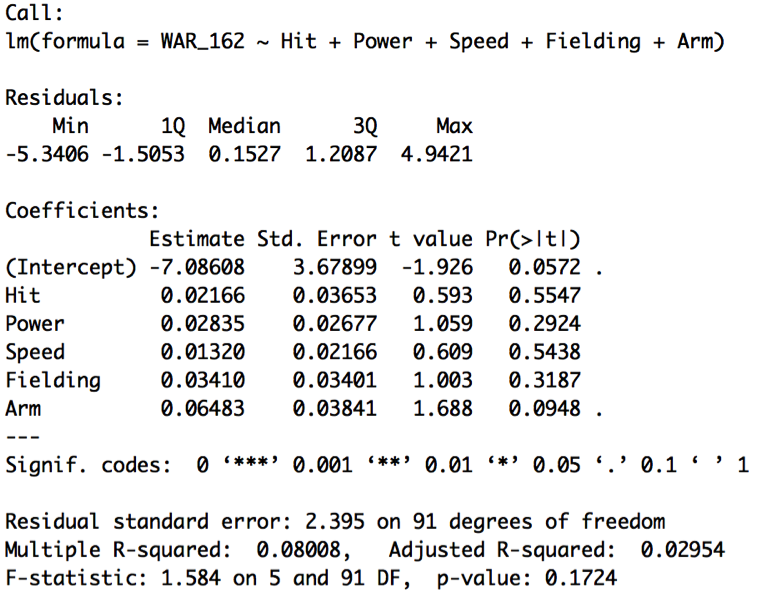 All five tools are associated with higher WAR_162, but we do not see any significant predictors. We then ran a regression of the summed value of the five tools and found a significant positive association between the two variables. A player perceived to be more talented or a “five-tool” player is clearly expected to perform better at the Major League Level. 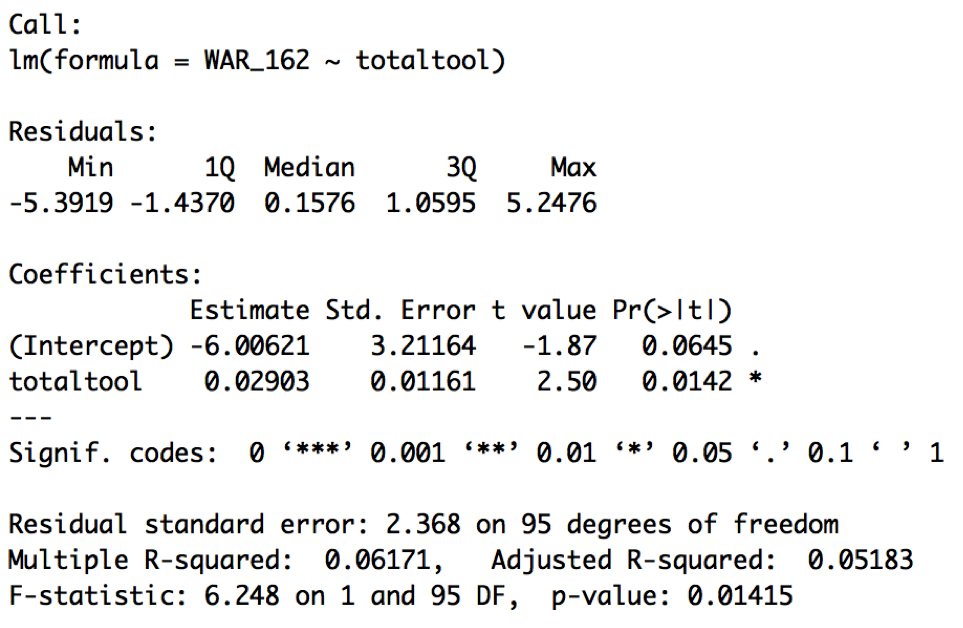 Summarizing the results for the other 4 response variables, we see strong and significant relationships between the tools and performance for Speed, Power and Defense. This makes sense as it is fairly easy to asses these tools while players are warming up for a game. Some players can run faster, throw harder and hit the ball further than others, and these abilities do not change very much over time.

The tool that is the hardest to predict is the ability to hit for average. Other people have noted that the hit tool is really tough to judge. There are problems with players approaches and swings that are not exposed by minor league pitching. Here is our output for predicting batting average. 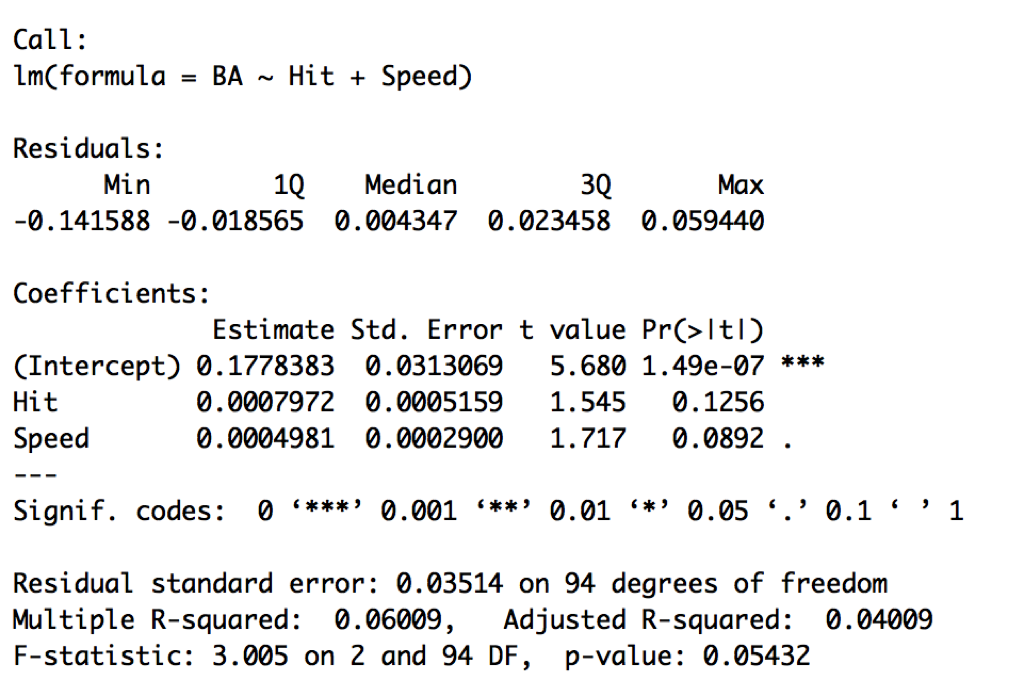 After a multitude of tests, it is difficult to make sweeping conclusions about our response variables because of our sample size. Maybe the baseball community should place less emphasis on the hit tool, as it is difficult to judge and more dependent on other variables than just physical ability. We learned that there are some easily identifiable skills that should hold more weight when discussing future outcomes. Expectations should be tempered, even with mercurial talents like Vladimir Guerrero Jr., whose father was just elected to the Hall of Fame because of the uncertainty in these projections. The gap between Major and Minor League pitching is large. Holes in players’ swings and approaches are not always revealed at lower levels of competition. The game is littered with guys that have struggled in that final leap.

Since we are only looking at the past few years, all of the players in this dataset still have a chance to fundamentally change the arcs of their careers. As such, there is not a definitive answer to the question at hand: Are scouting reports accurate? Time will tell.

How Much Correlation Between Seasons Is There in Each Major North American Sports League?
Time To Get A Catcher: An Analysis Of Wins Above Average By Position In Major League Baseball