Although the complex nature of football requires hours of film to begin to assess player quality, casual fans often judge receivers by their receptions, yards and touchdowns. However, a better stat to assess players is catch rate, the percentage of targets that someone catches. If you are able to snag more balls out of the air that are thrown in your direction, you create value for your team. This can also give us information about who should be targeted more, as they are more likely to make a play on the ball.

Since the football season is only 16 games, we often see players’ performance fluctuate. It is hard to discern which players are having a hot stretch versus those who are truly great players. As such, I examine whether or not players see some variance in Catch Rate from season to season.

We begin by making a model for expected catch rate by approximating air yards per target. Without the play-by-play data used by other websites to find these values, we approximate by using the following equation:

This will give us a solid proxy for average depth of target; however, our estimate will likely be deflated in comparison as long passes represent a relatively higher portion of targets than catches.

To find the expected catch rate based on depth of reception, we regress the two variables to find a linear model to fit the data. The data is from Football-Reference and the Football Database covering the 5 seasons (2012-2016).

To eliminate fluky seasons, this article only considers receivers and tight ends that saw at least 48 targets in a given season. I also took out all observations for players that didn’t qualify in the previous year, leading to 327 observations. The following shows the relationship between catch rate and average depth of catch. 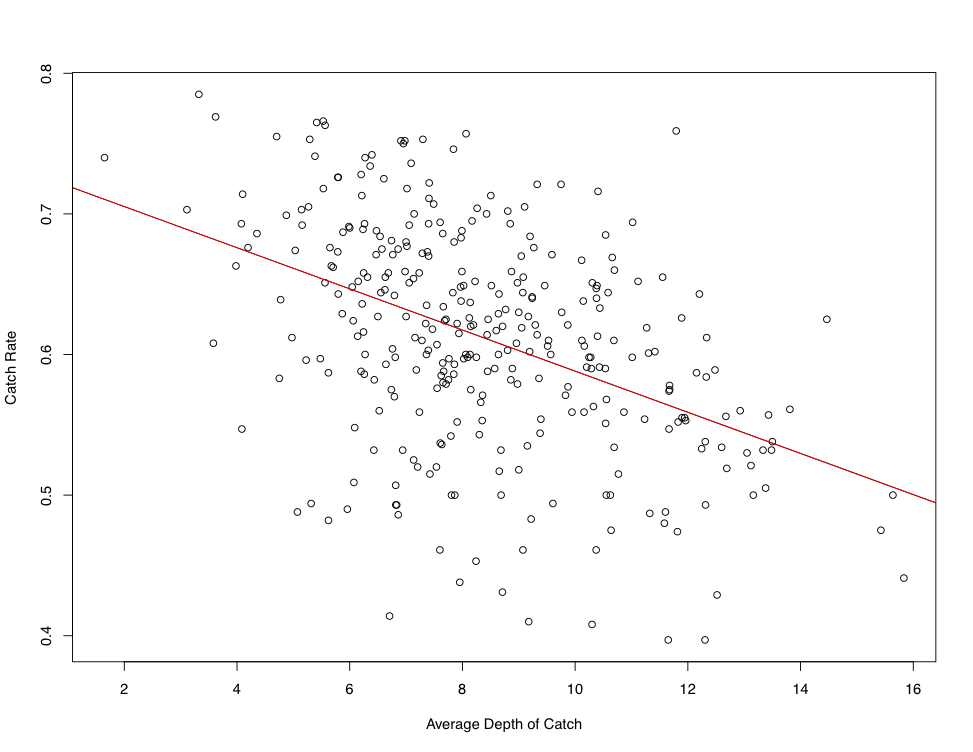 We see a strong negative correlation between the ADOC and Catch rate. It is important to note that quarterback ability is also an important variable to control for as receivers with more accurate quarterbacks will probably have higher catch rates, but we do not control for this in this project.

With this analysis, we can see who over and underperformed based on their expected catch rates every year. While there is an underlying skill involved (current and previous year production is positively correlated), we find that there can be high variability in year-to-year catch rate. Players like Kenny Stills and Desean Jackson, who were praised in the article, that inspired this post have seen themselves fall below their expected catch rate in the following years. When looking at more players who have similar stories, we begin to see that many players see large fluctuations in year to year catch rates.
The ultimate question was to see if there was regression to the mean for catch rates. I calculated the difference in year-to-year catch rate residuals (percentage points above/below expected catch rate). The following graph and table show the relationship between the this change in residuals seen in the current year and the previous year’s residual: 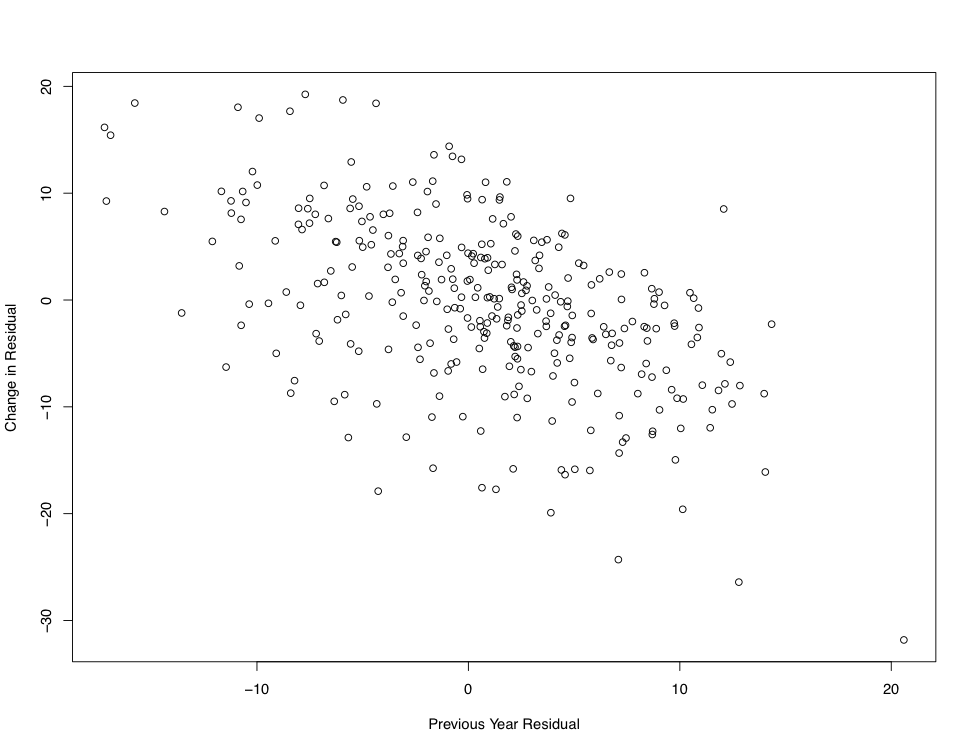 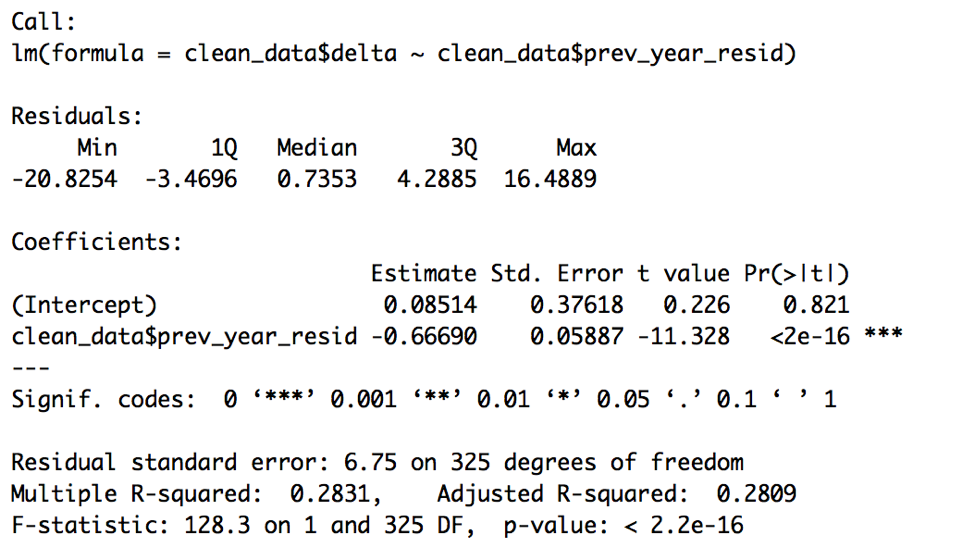 There appears to be a strong indication that players that perform above their expected catch rate see a strong regression to the mean the following year. We interpret our table to say that a player who performs one percent above their expected catch rate sees a decrease of .667% in their relative performance the following year.

Assuming that a receiver’s ability to catch passes doesn’t change *much* over a two year span, there are a couple reasons why this statistic can vary so much. One possible explanation for this is luck. Quarterbacks do not always throw great passes and it’s possible that for some reason a quarterback is throwing less catchable passes to certain receivers. It is also possible that, for certain receivers, defenders happened to cover passes thrown his way exceptionally well.

There is certainly an underlying ability to catch passes as we see certain players perform towards the top year after year. The following are the top 5 WR/TE in the data set in terms of cumulative performance above expectation.

This list passes the eye test of elite players, indicating that this is an important statistic. However, our regressions tell us to be wary of those who have are not exceptional talents

Similar to BABIP in baseball, we should be wary of players who are catching an extremely high rate of their targets, as they are likely bound to revert to the mean. Teams should be cautious heading into free agency when looking to sign these players.

Editors Note: If you have any questions about this article, please feel free to reach out to Chase at caldridge@college.harvard.edu