“It’s not an easy place to go” is a saying often used by soccer commentators when evaluating a team’s prospects in an upcoming away match. Champions League journeys to Eastern European countries like Russia, Ukraine and Turkey are often met with this kind of analysis. With the Champions League group stage starting tomorrow, this got me wondering, are these places actually that difficult to go to, or are commentators just using such hyperbole to fill airwaves? I decided to investigate this claim and try to determine, which place is the most difficult to go to in the UEFA Champions League.

To do this, I analyzed group stage results in the Champions League since 2003/4 season (the first where the current format of 32 teams followed by a 16 team knockout stage was instituted). I only chose Champions League group stage matches because of the differing nature of knockout matches (two legged aggregate ties) and the fact that the Europa League group stage often includes teams that rest key starters. To measure how strong a team (or country) is, I decided to compare the number of points they achieved in their home matches to the number of points achieved in their away matches. I aggregated this across all seasons for all countries and measured the percentage of points taken at home. At the country level, I chose all countries that have won at least 50 points in group stage matches over the time period and for clubs I chose all clubs that have participated in at least five group stages. At the country level, we get the following results: 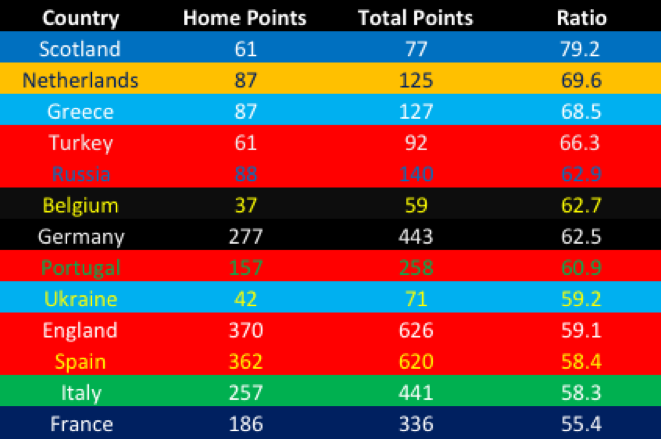 Scotland comes in at number one. This can be explained by the intimidating atmospheres on hand at Celtic Park (extremely Irish nationalist and Catholic) and Ibrox (extremely pro Union and Protestant) on Champions League nights. Celtic and Rangers are the only two teams to represent Scotland in the group stages of the Champions League since 2004. The Netherlands are a very surprise inclusion at number two given its strong economy, high standard of life and lack of renown for especially intimidating stadiums. Greece, Turkey and Russia are not surprising. In addition, the very successful countries are near the bottom because of a high denominator (in addition to winning many matches at home, they also win many matches away from home thus lowering their ratio)

The club level also tells a similar story, I’ve reproduced the top 10 and bottom 10 teams below (out of the 39 teams who met the criteria):

The presence of PSG, Real Madrid and FC Barcelona should not be too concerning. The reason for their inclusion is due to their overwhelming success in away matches, which jacks up their denominator. French teams’ struggles at home are interesting to see. On the top end, Celtic Park again overwhelmingly asserts its dominance as a fortress with Istanbul based Galatasaray coming in second.

In conclusion, the places that commentators often mention are “difficult to go to” (Scotland, Ukraine, Greece, Russia and Turkey) when describing a Champions League away day do in fact rank amongst the hardest away days. However, we were also able to uncover other interesting places that are comparatively very strong at home (Netherlands and the 2 German clubs) that one might not originally think of. We also found that extremely developed countries (England, Spain, France) performed comparatively worse in their home matches. This is likely explained by the extra comfort levels experienced by away teams when visiting their countries (and in the case of England, tamer stadiums).

What are your thoughts on this? Is Celtic Park the toughest away day in Europe? Were the results more or less what you were expecting? Let us know in the comments below.

Editors Note: If you have any questions about this article, please feel free to reach out to Andrew at andrewpuopolo@college.harvard.edu.

An Analysis Of Parity Levels In Soccer
English Soccer, Geographical Divides, and Margaret Thatcher: How Has The Geographical Composition of The English First Tier Changed Over Time?