Debating the Greatest of All Time (GOAT) for a particular sport is one of sport’s most common and probably endless pastimes, and one that by definition is subjective. Opining on the issue is likely to lose you more support than gain you, as personal tastes, emotion, and other subjective criteria invariably triumph in an individual’s mind. That said, however, it shouldn’t hinder us from trying to quantify greatness. Tennis’ recent Australian Open Final between Roger Federer and Rafael Nadal was billed by many as the battle for the Greatest of All Time. The two titans of the game’s history hadn’t been regarded as relevant contenders for the tournament after injury layoffs (and in Federer’s case, a Grand Slam drought of nearly 5 years). At 35 and 30 respectively, they were considerably past what is considered tennis’ prime age, yet here they were renewing the sport’s greatest rivalry in a major final.

In the aftermath of Federer’s 5-set victory, I set about to distill and quantify tennis greatness. A far from perfect work, I decided to leave out most “X-factor” parameters that often get dragged into these debates, for fear of becoming partisan. For example, preference for the aesthetic liquid fluidity of Federer’s forehand versus the attritional brand of tennis espoused by Novak Djokovic is an individual call, and not a measure of greatness of a sport (whose arbitrary rules never give points for aesthetics). I tried to keep the scoring to quantifiable measures and incentives as defined by the sport.

To start, I filtered the players by the requirement of having won at least 3 Grand Slams, or having ever been a Year-end No. 1. This narrowed the GOAT contenders to 25 players. Additionally, as is often done in tennis analysis, only the Open Era was considered – that is, results from the year 1968 onwards. This flaws the analysis by disregarding early player’s achievements pre-1968. For example, Rod Laver’s 12 Grand Slams shrink to 5 in the Open Era. However, for the sake of consistency, no rectification was made. Another caveat is the obvious one that the some of these players are still competing and could continue growing their legacy. These 25 players were then given points for every year, to establish a timeline of which player dominated a certain year. This was inspired by Ultimate Tennis Statistic’s similar effort, but over here, a perfect year was defined to have 100 points distributed according to Table 1.

The timeline of players is shown below (see here for zoomed-in version).

The total score is not meant to define greatness or to rank the players (as it favors too heavily in my opinion, longevity on the tour). Some tennis websites like the one mentioned above definitely use a tally method such as this to rank the best players of all time. However, it is used here only as a primary tool, and as a visual indication of the best players of a certain period of time. The GOAT number was divided into 5 parameters – Lifetime Achievements, Greatness Longevity, Peak Ability, H2H Index, and Adaptability.

The Greatness Longevity rationale is to determine for how long a player was able to stay above a “great” level during his career. It considers the consecutive, total, and range of years a player was able to achieve a greater than “great” level of performance using win percent, no.1 ranking, grand slam win, and a great year (as defined by the year-by-year timeline above). For example, the greatest career winning percent of all time is 83.03%. Therefore, player’s years where they achieved a winning percent than 83.03% scored them points in this category.

Peak Ability considered two major determinants of peak ability – best-year performance (from above chart), and Elo rating. The Elo rating used was an adjusted blend from Tennis Abstract and Ultimate Tennis Statistics, so as to be able to fill in the gaps. The best year a player has had from the list above was also used to score the Peak Rating.

The H2H Index considers a players’ performance against other players on the GOAT contenders list, as well as their career winning percent against the moving Top 10, Top 5, and Top 1. The Adaptability parameter is a test for glaring weakness in a players’ game – the GOAT contenders should suffer ranking-wise if they have obvious weaknesses. The Adaptability parameter thus takes into account the players’ performance on hard, clay, and grass courts, and uses their worst surface to rate them. Additionally, it similarly considers performance against type of opposition, sorted by right-or-left handedness, one-hand or two-hand backhand, and height.

The results of the five parameters of greatness are shown in the figure below. 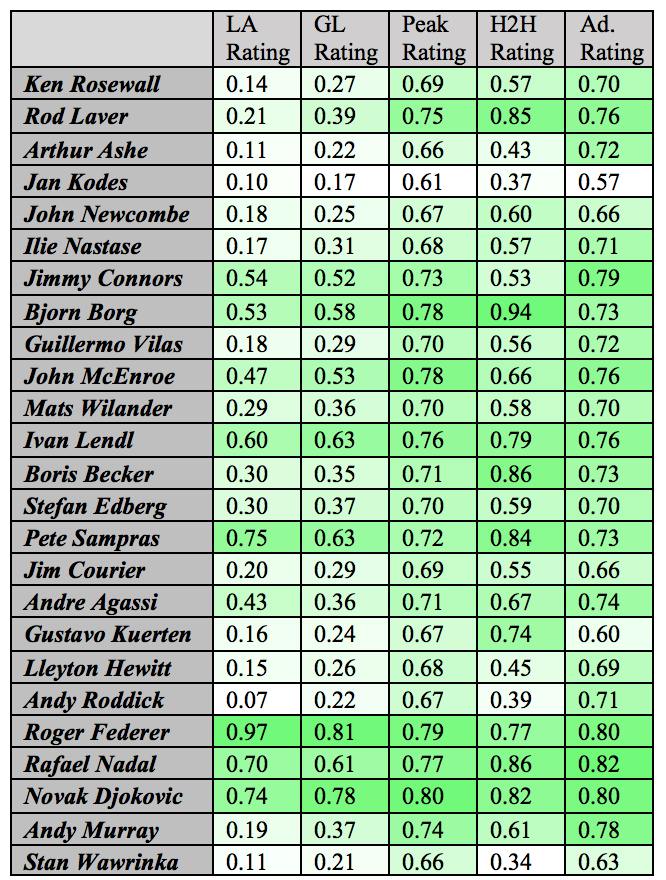 Depending on the preference of the reader, as to what constitutes greatness, one or more of the parameters can be weighted heavier than the rest in order to come up with their own list of greatest players of all time. To aid the process, I derived a few different alternatives. The first one is a simple equal weighting, the second is my own judgement of greatness (15% LA, 15% GL, 40% Peak, 20% H2H, 10% Adaptability), the third alternative aims to capture the popular sentiment of career achievements being all-important due to the definition of the sport and what it means to be great at it (40% LA, 30% GL, 20% Peak, 5% H2H, 5% Adaptability). The fourth alternative aims to capture the other end of the spectrum that rates peak pedigree as the most important quality (5% LA, 20% GL, 40% Peak, 30% H2H, 5% Adaptability), and the fifth alternative presented the not-so-popular opinion of rating consistency across players, time, and surfaces as the most important (5% LA, 20% GL, 5% Peak, 30% H2H, 40% Adaptability). These results are shown below. 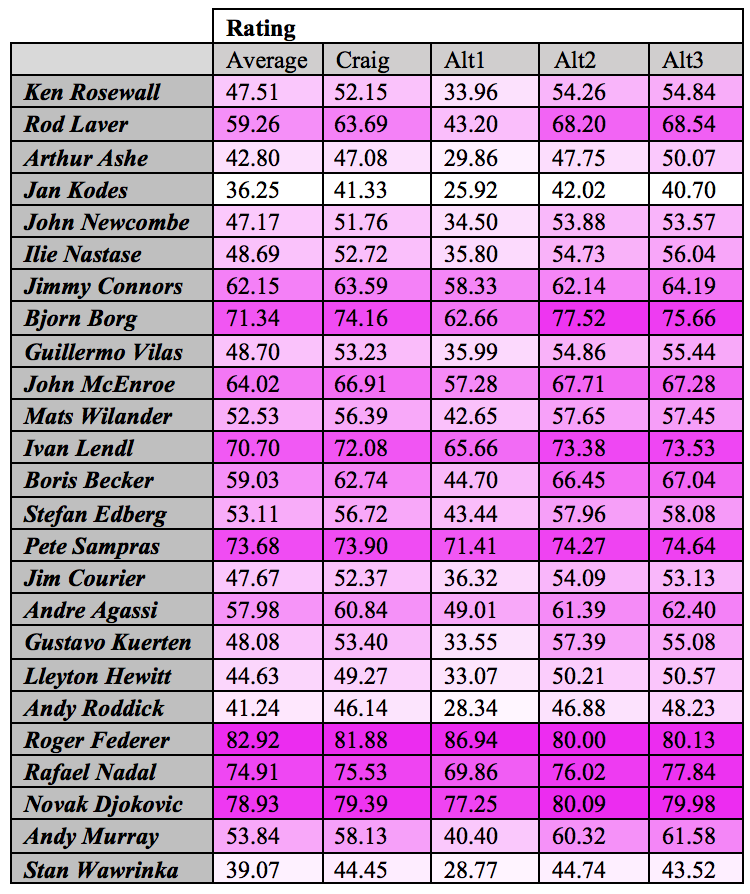 Federer ranks number 1 in 4 out of 5 cases, narrowly being edged by Djokovic in the Peak Alternative (80.09 to 80.00). The ratings clearly skew the rankings in favor of modern players, or so it seems. The absence of Rod Laver from the Top 5 can be explained by the earlier mentioned problem of disregarding pre-1968 results. However, today’s Big 3 (Federer, Nadal, Djokovic) make up the Top 3 greatest of all time in three of the alternatives, and Top 4 in all five of the alternative weightings. To be fair however, tennis experts and analysts holistically also rank these modern greats as the greatest of all time. But some critics explain that the increasing homogeneity of playing conditions allows for dominance by the best players of a generation, and thus allows for higher number of titles, etc.

The simple yet powerful ranking of number of Grand Slams in often used to depict the standing of great players. Shown below is my ranking of the greatest tennis players of all time, compared to the number of Grand Slam titles they won in the Open Era. There is some shuffling at throughout, but overall, there is an expected positive correlation with rating points and Grand Slam wins. Some prominent surprises include Laver’s being 8th despite his “only” 5 wins in the Open Era, Edberg and Wilander’s relatively low position, as well as Murray’s relatively high position with 3 wins. Note that the seemingly contentious names toward the bottom of the list are not meant to make up the Top 25 greatest players of all time. Rather, this is a ranking of the 25 players filtered by the initial Grand Slam/Ranking criteria. I imagine beyond the Top 15 there would definitely be a few names that would drop out of the Top 25 and replaced with players who have won less than 3 Grand Slams and have never ended the year as world No. 1. 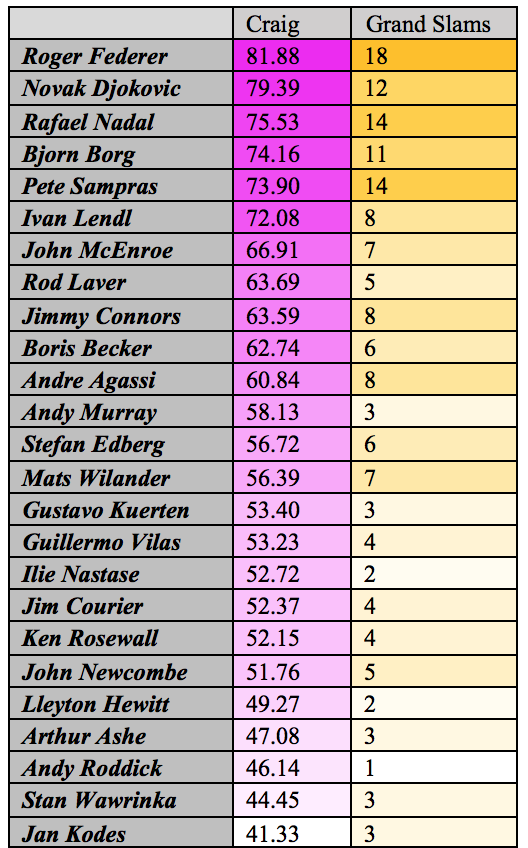 Rather unsurprisingly, Roger Federer snags the GOAT spot. The rating system may be misleading for someone who bypasses the methodology, however, in that it in depicting the closeness of Djokovic to Federer (2.5 points) on the scale, it may be easy to infer that a couple more Grand Slam wins will put Djokovic over the edge. However, this isn’t the case at all. If Djokovic were to, say, get 1 Grand Slam a year and nothing else significant for the next 3 years, and end up with 15 slams, and furthermore, doesn’t concede any points in H2H or Adaptability (which is unlikely as winning percentages would decline towards the end of careers), he would still fall short of the GOAT title on my scale, finishing up with 81.49 points. In fact, he would fall short on the first three alternatives, retaining his GOAT title in the fourth alternative, and gaining the claim in the fifth alternative weighting.

I hope to make improvements and refine this model with time, and hopefully can get some good suggestions in the meanwhile. In the interim, however, the numbers agree with the majority of fans and pundits in crowning Roger Federer as the greatest ever to have graced the game of tennis.