Transition buckets are a huge element of success in college hoops. About a quarter of shot opportunities from 2014-2016 in college basketball came on the break, with eFG% in those opportunities rising from 50.2 percent in half-court sets to 54.2 percent in the first ten seconds of possessions. It makes sense, then, that teams should have an incentive to get back on defense once shots are launched. As a Syracuse fan, I know that every time the Orange can stop the ball in transition and force the opponent to play half-court is a small victory.

There’s obviously the other side of this argument—that an offensive board has some sort of inherent value. Offensive boards often lead to easy putbacks, and at the very worst, a reset on the possession if the big is forced to pass the ball back up top.

I have data from the past three full NCAAB seasons, courtesy of Hoop Math’s Jeff Haley, of teams’ offensive and defensive rebounding stats on shots at the rim, jumpers, and three-pointers. I also have data on how often teams shot in transition off of defensive rebounds, which is available on the site itself.

I then found the difference between a team’s actual ORB% / DRB% and its eORB% / eDRB% to find out a team’s relative comparison to NCAA-average. This is to say that if a team’s ORB% was 30%, and its eORB% was 29%, it would receive a +1% rating. I then standardized these quantities across all teams for all three seasons (I’ll refer to this as addORB% and addDRB%)

Next, I created a general additive model that modeled the percentage of fast-break opportunities that came off a shot against a team’s addDRB% (its rebounding skill) and its addORB% (its tendency to crash the offensive boards.

The output of the GAM showed that both variables were significant in predicting transition opportunities for opponents. The plot of the coefficients for addORB% and addDRB% are as follows (addORB% on left, addDRB% on right): 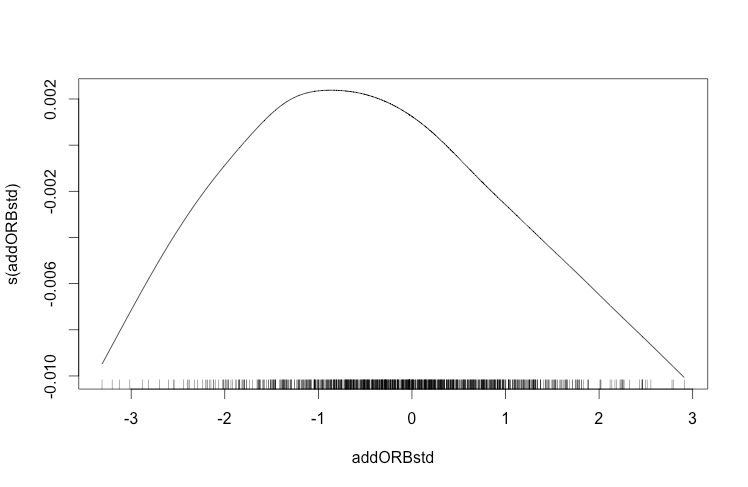 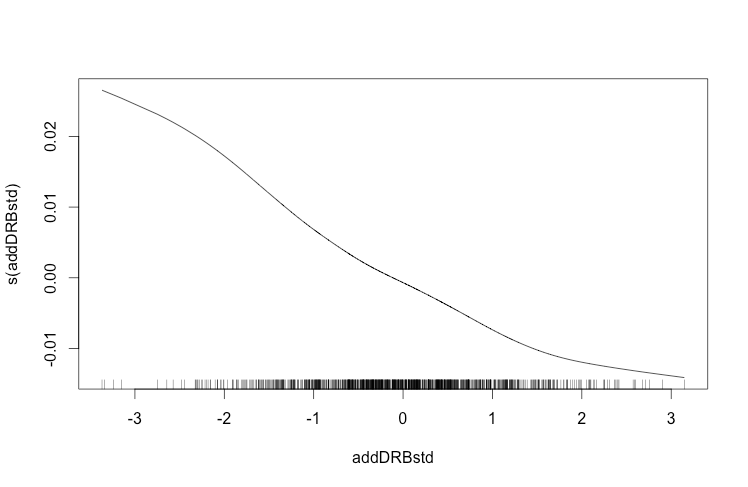 As you can see on the right, the better a team is on the defensive boards (the measure of skill), the less likely they are to allow transition baskets. However, the more interesting graph is on the left. The graph says that teams that retreat and teams that aggressively crash the glass tend to give up fewer transition opportunities, whereas teams that moderately try on the boards give up about 1 percent more opportunities in transition. This, in a way, makes sense—retreating obviously leads to less transition, but being really good may force defensive teams to allocate more guys to the glass, limiting outlet opportunities for teams in transition. The drop for higher addORB% could also arise as a function of those teams being better at offensive rebounding than defensive rebounding. However, if it’s not, it seems best to be aggressive—not only will you increase your odds of getting a board, but you won’t necessarily be risking too many easy transition baskets.

This doesn’t definitely answer the question of whether or not to crash the glass—it’s tough to answer that without tracking data. A similar question for the NBA was asked at the Sloan Sports Analytics Conference, and it was also suggested that it may be worth it to focus more on offensive boards than immediate retreat. But it seems like in the NCAA, aggression may be the best option.

2016: A (Mostly) Statistical Year in Review
Wichita State Fans Should Be Upset