The first round of matches at Copa America has past and it has left us a lot to talk about. While goals were hard to come by in the first couple days, the scoring has started to pick up. The tournament has an atmosphere that is very typical of both CONCACAF and CONMEBOL matches, with four red cards being shown in the 8 matches. Two of those four cards were shown in a Mexico-Uruguay game that started with the Chilean national anthem being played instead of the Uruguayan one, and ended with the Uruguayan FA claiming that the tournament is rigged for Mexico to win. Welcome to Copa America! 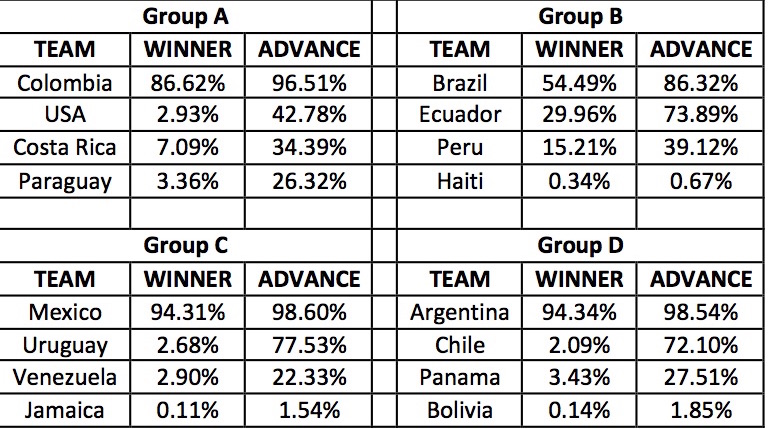 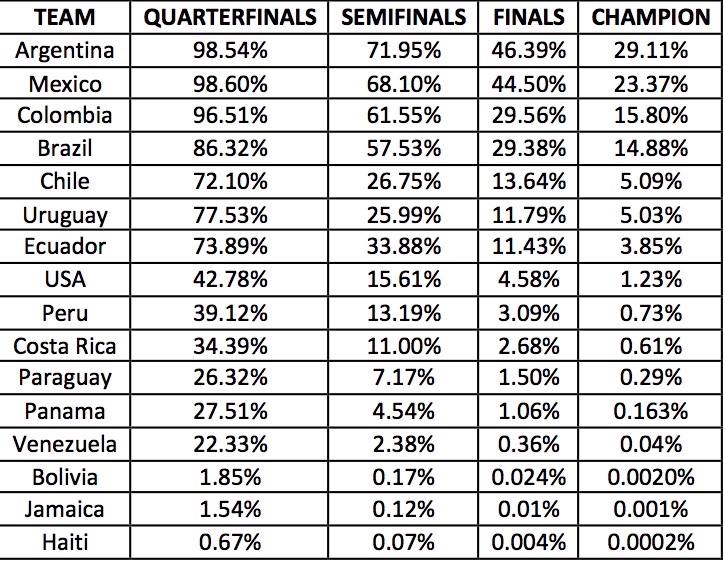 Winners: Mexico, Colombia, Venezuela, Panama
Uruguay were not wrong in the importance that Sunday night’s match meant for Mexico. They are now the second-most favorites according to our model, with their chances of winning increasing by over 8%. They are clear favorites to win the group, and with Argentina’s win last night, it looks like they will avoid them in the quarterfinals. Colombia’s odds of making the semifinals increased by about 9% after beating the United States and becoming clear favorites to win Group A. Venezuela and Panama also won important games which set them up to potentially get past Uruguay and Chile, respectively in order to make it to the quarterfinals.

Losers: Uruguay, Chile, USA
Uruguay were the biggest losers of the first round, as their chances of making the finals decreased by 13% and their chances of winning the tournament were cut in half. Chile are also going to find their path to defend their title a bit tougher, as their chances of winning the group are minimal and a potential quarterfinal match with Mexico awaits them. The US also had a bad round, losing a crucial match if they were hoping to top Group A and get a more favorable quarterfinal match. However, it could have been worse, as a match between Costa Rica and Paraguay ended in a draw with a stoppage time red card for Costa Rica defender Kendall Waston meaning he will miss tonight’s game. This model’s likely Group A winner, Brazil, also looks to be overrated by the model, with Neymar not participating in this tournament, so the US’s probabilities of advancing past the quarterfinals are probably underestimated.

USMNT Update
Tonight’s game against Costa Rica is definitely a must-win. A US loss and a Colombia win means that the USA will be eliminated tonight, before playing their last match. On the other hand, a win tonight would be huge. The US’s chances of advancing would go to 77%, as they would control their destiny with only a game to go. A draw would put them at a 39% chance to advance and needing help from Colombia to get that second place spot.