In the first round of the 2014 British Open, 15 players out of the 18 total that shot 69 or better had teed off during the morning slots. During the afternoon, Royal Liverpool GC played much harder with significantly harsher weather conditions. Although this magnitude of discrepancy in performance between afternoon and morning tee times is extreme and perhaps rare, many golfers overlook the influence of tee time on their score.

There are two practical theories for how a golf course responds to high usage. It’s possible that the course, specifically the greens, get torn up and the balls roll slower (becomes easier), or the course firms up and plays faster (becomes harder). Using data from pgatour.com, it is possible to analyze the impact that the course’s prior use has on each player.

We can quantify this impact by taking the difference between each player’s Early Scoring Average and their Late Scoring Average. The former refers to scores carded with a morning tee time, and the latter represents those posted with an afternoon tee time. Since pgatour.com uses approximately 80 rounds to calculate each player’s early and late scoring average, the influence of tournaments like the 2014 British Open can be considered negligible, as hopefully good and bad weather will be approximately randomly assigned to morning or afternoon. Here’s a histogram displaying this difference for 177 tour players, with an average of 80 rounds per player: 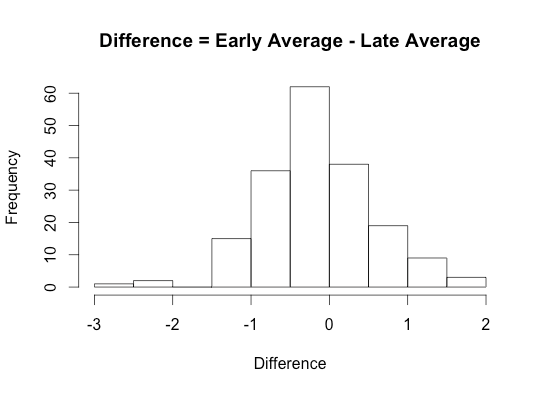 As expected by the central limit theorem, this difference is approximately normally distributed. What’s most interesting about this data is that it is not centered around zero. As the histogram shows, its mean is -.1544, and given the standard deviation of .710, we can reject the null hypothesis that afternoon scores have the same mean as morning scores with a two-sided p-value of 0.004. This suggests that courses play more difficult in the afternoon, perhaps due to increased firmness of the greens.

It’s plausible that the better golfers are less affected by the course’s increased firmness than those weaker golfers. After all, there must be a reason why Rory McIlroy consistently outperforms Boo Weekly; however, a simple analysis disputes this claim. 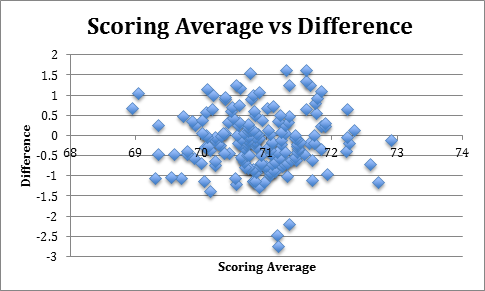 As apparent, there is a almost no correlation (R = -.02) between scoring average and difference, suggesting that both better and worse golfers are equally affected by the golf course’s natural changes.

There is no debate on whether playing conditions affect a golfer’s score, and it is accepted that a golf course changes with constant use. Now, it’s fair to assume that golf is most challenging on that Sunday afternoon, moments before a champion is crowned. Perhaps, the USGA place the leaders in the latest tee times to even the playing field and make the action more exciting. Let’s be real, golf needs all that it can get to keep itself on the TV screen.